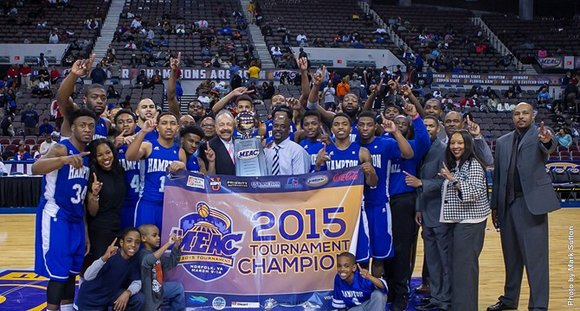 Norfolk-Va. — Twenty minutes into Saturday's MEAC Tournament final at Norfolk Scope Arena, the Hampton University men's basketball team and Delaware State were deadlocked. But once the second half started, the Pirates kicked into gear.

That 20-minute drive to the finish netted Hampton an 82-61 win over the Hornets and the 2015 MEAC Tournament title – the Pirates' second such crown under head coach Edward Joyner Jr. and the first since 2011.

Hampton (16-17), the No. 6 seed, earned the conference's automatic bid to the NCAA Tournament; the Pirates will learn their opponent, location, and game date on Sunday when CBS unveils the bracket at 6 p.m. EST.

Hampton out-rebounded Delaware State 35-34 and held a 26-8 edge in points off turnovers – largely because the Hornets turned the ball over 17 times.

Even though the Hornets opened the game with an 8-3 spurt, and later held a 15-6 lead, the Pirates methodically began clawing at the deficit, going on an 11-2 run over the course of five and a half minutes to tie the game at 17-17 after Johnson hit a trey at the 8:21 mark.

The score was tied six more times in the half, though the Pirates held a 28-26 lead with 3:09 left in the half after a layup from guard Quinton Chievous (Chicago, Ill.). Powers later sank a layup of his own with 1:28 left to put Hampton up 32-30.

DeAndre Haywood sent the teams into the locker room tied at 32-32 with a layup with 1:04 left.

Johnson, who was every bit as important to the Pirates on Saturday as Chievous had been in Friday's semifinal win over Norfolk State, led the Pirates with 14 points at the break.

When Amere May sank two free throws with 15:55 left in the second half, it gave the Hornets a 4-39 lead. But Delaware State relinquished the lead on the ensuing possession when Darden drained a three, and the Hornets never led again.

"There is always a point in a game like that where you need some separation," Joyner said. "It gave us a chance to exhale. It was definitely a key."

May, the MEAC's leading scorer who struggled to a 6-for-15 shooting day, hit a three to cut the lead to 54-48 with 9:13 left, but the Pirates responded on a Powers layup on the following possession. Hampton's first double-digit lead came with 7:43 left, when junior forward Jervon Pressley (Charlotte, N.C.) hit a layup to put the Pirates up 61-51.

All told, after the Hornets clawed to within five, the Pirates ended the game on a 21-5 run – a run punctuated by a Chieovus 3-point play with 38 seconds remaining.

May led the Hornets with 20 points.