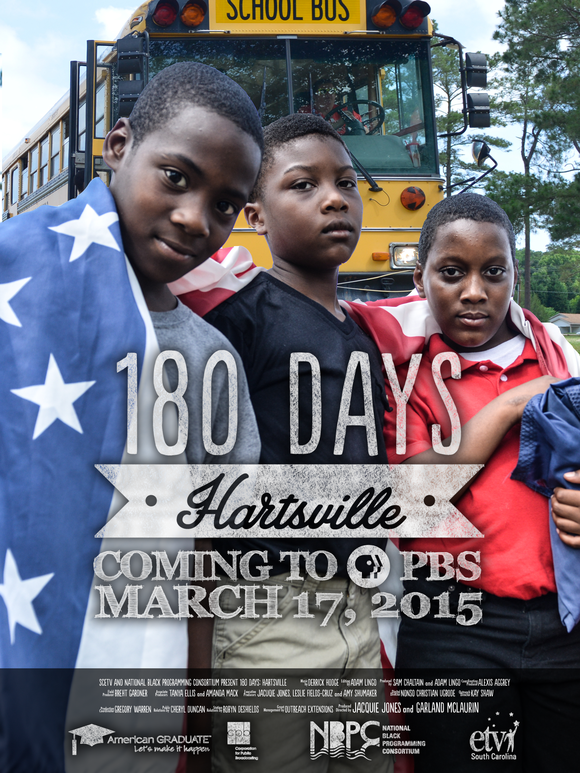 Small stories and surprising victories bring the battle between small town poverty and education to light when camera crews spend an entire school year inside two South Carolina schools. In 180 Days: Hartsville, viewers will meet educators, families, and business leaders in daily battle with poverty and education. Principal King has gone from being a troubled student to working to save a troubled student. Thornwell Elementary School principal Julie Mahn, daughter of sharecroppers, is the first in her family to go to college. Monay, herself a high school dropout, demonstrates the varied pressures on single mothers as she struggles to raise three children while juggling two jobs. Her son Rashon, a fifth grade student in West Hartsville Elementary, is a bright boy but his behavior is threatening his own educational future. Pierre Brown is not only one of the only male teachers that we see in the film, he’s also one of the only male role models in his students’ lives. Original air date: March 17, 2015 in two back-to-back episodes. Presented on PBS by South Carolina ETV (www.scetv.org (South Carolina ETV)

NEW YORK — A recent Southern Education Foundation report has uncovered that, for the first time in 50 years, the majority of students attending public schools in the U.S. are from low-income households. An inspiring new documentary 180 Days: Hartsville takes a fresh look at the nation’s poverty and education challenges from a rural South Carolina town triumphing in the face of extraordinary challenges. The two-hour special, co-produced by South Carolina ETV (SCETV) and National Black Programming Consortium (NBPC), airs on PBS from 8 to 10 p.m. ET on Tuesday, March 17 (check local listings). The film was funded by the Corporation for Public Broadcasting (CPB) as part of American Graduate: Let’s Make it Happen, a public media initiative to stem the dropout crisis by supporting community-based solutions.

Co-directors Jacquie Jones and Garland McLaurin, the team behind the Peabody Award-winning documentary 180 Days: A Year Inside an American High School which premiered in 2013, joined SCETV in Hartsville, South Carolina for more than a year. They filmed in two elementary schools struggling with new curriculum standards and maintaining funding, while meeting the needs of individual students. South Carolina ranks 45th in the country in education. The majority of Hartsville residents hover on the poverty line with a median income of less than $30,000 and more than half of the city’s students qualify for free and reduced-price school lunches.

Yet Hartsville is fighting the odds—and winning—with an astonishing 92 percent graduation rate in their city. This is a remarkable achievement considering that one-third of students from low-income families in many states did not graduate despite an increase in the national graduation rate of 80 percent for the class of 2012, according to the National Center for Education Statistics.

“With poor children now representing a new majority of public school students, it is more critical than ever that successful models in education be explored to ensure the American dream is attainable for all of our children,” said Jacquie Jones, co- director and executive producer. “Hartsville has proven that if the right forces in a determined community come together to put children first, tangible results will follow.”

The series introduces viewers to a family struggling to make ends meet, including Monay Parran, a high school dropout and single mother struggling to raise three children while juggling two jobs, and her bright son Rashon, a fifth-grade student in West Hartsville Elementary, whose behavior is threatening his own educational future. Viewers will also meet the leaders and role models who are helping improve outcomes for other students through their heroic efforts and inspiring stories. These American Graduate Champions include: Thornwell Elementary School principal Julie Mahn, the daughter of sharecroppers and the first in her family to go to college; Tara King, a once troubled student now principal of West Hartsville Elementary School; Pierre Brown, one of the only male role models in his students’ lives; Harris DeLoach, executive chairman of the Hartsville-based Sonoco Products Company, who has invested $5 million of Sonoco’s money in the city’s public school system to raise test scores; and Darlington County Schools Superintendent Dr. Eddie Ingram, a 30-year veteran of public education and new kid on the block, mulling how his schools will fulfill the vision DeLoach describes.