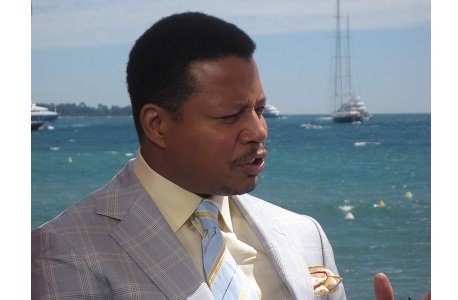 Terrence Howard talks with the press about the movie "Winnie", a Winnie Mandela biopic on Sunday, May 16, 2010 in Cannes, France. (Photo: Marie Lora/CNN)

(CNN) — Terrence Howard would like a little bit more reality on his hit show "Empire."

"Why is TV showing something different from the reality of the world?" Howard asked. "Why is there a thing called censorship that stop people from hearing everyday talk? We use n* every day. It's become part of a conversation. Why aren't we using it in the show?"

He expanded on his thoughts during an appearance Monday on "Access Hollywood."

"And since nr is used in almost every conversation in most black neighborhoods, why is it that we don't hear it on TV anymore? Are white people afraid of it? Did they create the word? But if this is something that we use on a daily basis, then let's address what it really means."

And what does the word mean to the "Empire" star?

But co-star Taraji P. Henson, who plays his ex-wife, Cookie Lyon, is not feeling it.

When TMZ asked whether she believed the Fox series should be using the word, she responded, "Naw, you might piss people off."

David Rambo, one of the show's writers, told TMZ that as a white man, he didn't think he could make the call on whether to use the word. Context is everything, he said.

"It's a powerful word," Rambo told TMZ. "It's such a huge issue. It came up a lot in our writers room."