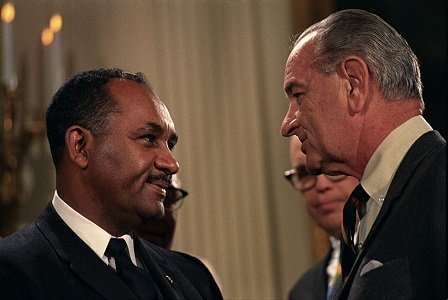 (NNPA) — Looking at our nation and noting where we have come since 1965 gives us reason to celebrate. However, in our celebration we should be mindful that true equality was never achieved, and that instead of moving towards justice we are moving in the other direction.

Just a year ago we celebrated the 50th anniversary of the passage of the Civil Rights Act of 1964, though the Act has been and continues to be under attack from the right wing of this nation as some even ponder its “constitutionality.”

Now we celebrate the 50th anniversary of the Voting Rights Act of 1965, just two years after the law was gutted by a decision by the Supreme Court that was not founded in law and where the Chief Justice incredulously opined that blacks in Mississippi had superior voter access than blacks in Massachusetts.

It is in this vein that we say that there should be a celebration, but there too must be recognition of the work that must be done to repair the harm done by the Shelby County decision. The ink wasn’t dry on that decision before Southern states such as North Carolina, Texas and Mississippi started to take action to go back to how things were.

Blacks in all the old confederacy are now confronting an array of repressive laws such as unduly restrictive voter identification laws, cut backs on early voting, enhanced purging of voters, burdensome identification issuance or renewal laws, changing of voting sites to make it more difficult for people of color to vote and a facing host of other such discriminatory obstacles. We are hearing dog whistles every day in 2015.

In the wake of last weekend’s celebration in Selma, we hope that the NAACP gets proper recognition for its essential role in the law’s passage. We love and respect those great Americans such as Dr. Martin Luther King, Jr. and President Lyndon Baines Johnson who are deservedly given so much credit, but others, including Republican Senate Leader Everett Dirksen of Illinois and the NAACP’s Clarence Mitchell had

indispensable roles as well. Sadly, the celebration of the 1964 Act largely ignored Mitchell and we hope this year’s celebration does not do the same.

Clarence Mitchell was born into poverty, but rose to prominence as the NAACP’s chief lobbyist and became widely known as the nation’s 101st Senator. He was awarded the Presidential Medal of Freedom in 1980 by President Jimmy Carter and the NAACP’s Spingarn Medal in 1969. Mitchell strategized with Johnson to keep waffling northern senators on board and utilized his friendships with Republicans and Democrats to help effectively persuade them to come on board.

As the nation’s chief civil rights lobbyist, he helped to organize and guide a coalition of diverse supporters from NAACP units, other civil rights, church and labor groups to address pressure points as they arose in Congress and to keep pressure on for members of Congress to support the bill. President Johnson was even quoted as saying no person forced his door open more than Clarence Mitchell.