Teen drivers: Buckle up and lower the volume, Dad's monitoring you 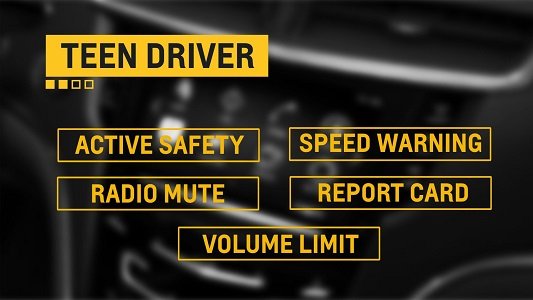 The all-new 2016 Chevrolet Malibu will debut a system, called Teen Driver, that provides parents with a tool to help encourage safe driving habits for their kids. The feature can mute the audio of the radio or any device paired with the vehicle when front seat occupants aren't wearing their safety belts, and it gives audible and visual warnings when the vehicle is traveling over preset speeds. (Photo: From General Motors)

GM said Friday it will soon introduce new technology in its cars to help parents keep tabs on their teens behind the wheel.

Parents can pre-set the car to give visual and audible warnings when teens exceed preset speeds. If teens ignore the warnings, the system will rat them out to mom and dad. Parents can review a "vehicle report card" that tells them how far and how fast their teens drove.

The first GM car with the "Teen Driver" feature will be the 2016 Chevrolet Malibu. It will be built into the car's existing MyLink system that operates entertainment and navigation controls. GM says it plans to include the system in other cars down the road.

To get teens to buckle up, the system automatically turns off the radio and connected devices if the safety belts aren't fastened in the front seat. That means teens will need to strap in before they can rock out. (Groan). Mom and dad can also limit the maximum volume on the car's sound system. (Eye roll).

The report card also gives parents a sense of how their teens perform behind the wheel by listing which safety features were engaged, including antilock brakes and stability control.

In addition, parents can program the system so that the car's safety features, such as parking assist and forward collision alert, cannot be disabled.

To activate Teen Driver, parents need create a PIN number in the MyLink settings. Teenagers will have their own designated key fob so the car knows who's driving. To hack the system, teens will need to steal their parent's key fob and reprogram it.

GM says the system is designed to help kids learn safe habits and give parents some peace of mind when inexperienced teen drivers hit the road. It notes that the fatal crash rate per mile driven for 16- to 19-year-olds is nearly three times the rate for drivers ages 20 and over, according to the Insurance Institute for Highway Safety.

"We developed this system so parents could use it as a teaching tool with their kids -- they can discuss and reinforce safe driving habits," said GM safety engineer MaryAnn Beebe.

Teens may see it differently, however.