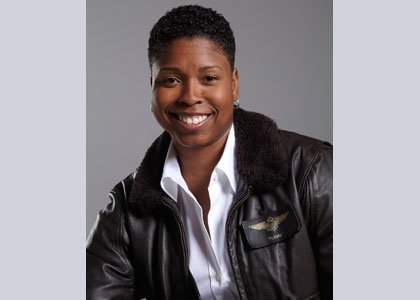 Vernice "FlyGirl" Armour is America's first African-American female combat pilot. She is a motivational speaker, entrepreneur and author of “Zero to Breakthrough: The 7-Step, Battle-Tested Method for Accomplishing Goals That Matter.” (Courtesy Photo)

Before Women’s History Month draws to a close, it is a prime opportunity to highlight women who have broken barriers in the military, such as America’s first African-American female combat pilot, Vernice “FlyGirl” Armour. The Chicago-born speaker, author and entrepreneur served in the military for 14 years. She currently resides in Northern Virginia and founded VAI Consulting and Training, LLC.

“I didn’t even know that I had become the first [African-American female combat pilot] until Oprah’s people did the research and found out that I had been the first in combat. I became the Marine Corps’ first black female pilot, period, whether combat or anything, but then America’s first black female combat pilot was after the fact,” the trailblazer said. “I wasn’t going for titles. I was just living the amazing, juicy, epic life that I wanted to live, and it resulted in breaking some of the barriers.”

While in the Army ROTC program during college, Armour was also enlisted in the Army Reserve. While there, she spotted an African-American woman wearing a flight suit. The sighting left a memorable impression on her.

“I actually made a comment to my battle buddy that black people don’t fly. Three minutes later, when we walked inside of a tent, I saw the black woman in the flight suit. I was like, whoa, that is amazing! Why didn’t I think of that? As a 20-year-old, it was mind-blowing. She planted a very strong seed,” Armour said.

While breaking barriers, Armour said she did not experience overt racism and sexism, because people are smarter than to openly make their feelings known. Armour developed a strategy to deal with obstacles and unwelcoming people she may have encountered, when tough times arose.

“The moment I put my focus on why ‘Joe’ didn’t say hello, lives were at stake and that’s deep. For people who are going to be reading my words, I really want them to put this into perspective for themselves. What is the bigger why? What do they really want? Are they letting other people’s situations or things distract them from their goals? What I started saying after that is acknowledge the obstacles, don’t give them power,” Armour said. “I didn’t get everything the first time. I failed the flight test the first time. I studied for a month solid and took it again then I passed it. It took me three applications to get into the Marine Corps. It took me over a year to get into the police academy. Unfortunately, I had my number of failures in college courses as well, so everything didn’t just happen easily. What it is I feel is it’s the grit and tenacity that my parents instilled in me about not giving up. If it’s worth having, it’s worth working for.”