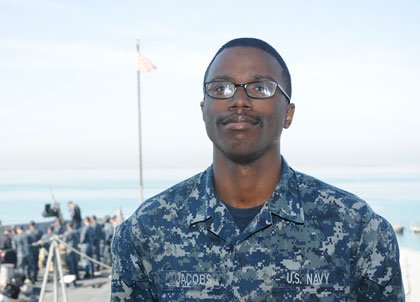 A 2012 Randallstown High School graduate and Baltimore native is serving aboard USS New Orleans, one of the Navy’s newest and most advanced amphibious ships, designed to deliver Marines and their equipment to and from war zones.

Seaman Anthony Jacobs is a logistics specialist aboard the San Diego-based San Antonio-class amphibious transport dock ship. The ship is longer than two football fields at 684 feet, 105 feet wide and weighs more than 24,000 tons. Four diesel engines can push the ship through the water at more than 24 mph.

USS New Orleans is the fourth Navy ship to be named for the city of New Orleans, and is the second vessel in the San Antonio-class of high-tech amphibious assault ships.

As a 21-year-old with numerous responsibilities, Jacobs says he is learning about himself as a leader, sailor and a person. He added that it is an exciting time to be in the Navy, and serving aboard a ship has truly made him a better person. “The Navy helps me to think bigger picture on all things. I used to be one-track minded, but now I look at everything from all angles,” said Jacobs.

He also said he is proud of the work he is doing as part of the New Orleans’ 427-member crew, protecting and defending America on the world’s oceans. “The Navy helps keep our waters safe. From our ship’s standpoint, we are able to put our Marines’ boots on ground wherever they are needed to defend our country,” Jacobs explained.

Sailors’ jobs are highly varied aboard USS New Orleans. Approximately 46 officers and 381 enlisted men and women make up the ship’s company, which keeps all parts of the ship running smoothly— this includes everything from washing dishes and preparing meals to handling weaponry and maintaining the engines. Another 700 or so form the deployable Marine Corps battalion and New Orleans is capable of transporting the battalion and landing them in hostile territory via helicopters, vertical takeoff and landing aircraft and air-cushioned landing craft.

“New Orleans is truly a fine warship and it is our duty to bring her to life,” said Capt. Doug Verissimo, the ship’s commanding officer. “Our Sailors have been working very hard bringing her from a post-deployment repair period to our upcoming tactical integration with our Marine teammates. I feel an unparalleled sense of pride working alongside our nation’s finest.”

Collectively, the San Antonio-class ships will functionally replace more than 41 ships providing the Navy and Marine Corps with modern sea-based platforms. Amphibious transport dock ships are warships that embark, transport, and land elements of a landing force for a variety of expeditionary warfare missions. These ships support amphibious assault, special operations or expeditionary warfare missions and can serve as secondary aviation platforms for amphibious ready groups. Because of their inherent capabilities, these ships have been and will continue to be called upon to also support humanitarian and other contingency missions on short notice.

As a member of one of the U.S. Navy’s high-tech amphibious assault ships, Jacobs and other New Orleans sailors are proud to part of a warfighting team that readily defends America at all times.

“I love seeing other countries. I have been to places I never thought I would before. I love experiencing other cultures and how they live,” said Jacobs.