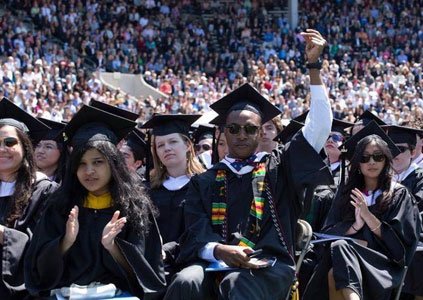 African-Americans and Latinos are graduating at a higher rate than they did a year ago, according to the Department of Education. (Photo Courtesy of BET)

Two reports released within moments of each other have served to highlight how African-Americans and Latinos have overcome many obstacles in order to strive toward success.

However, the fine print of each of these reports— one by the National Urban League and the other from the U.S. Department of Education’s National Center for Education Statistics— provides a reality check that the American Dream remains deferred for individuals of color.

“There is that America that is too black and too brown which seems to be stuck on the other side of this great American divide,” said Marc Morial, president and CEO of the National Urban League in New York, which issued its “State of Black of America 2015” report on March 19, 2015.

“I must use the word crisis,” Morial said during a news conference announcing the new report in Washington, D.C., where he also noted that seven metro areas in the country had a 20 percent rate of black unemployment.

The Urban League’s report noted that more of the nation’s blacks and Latinos have health coverage and fewer are victims of crime compared to recent years. However, the overall wealth and employment still revealed stark disparities compared to whites.

The report creates an “equality index” that used certain measurements to compare the well being of black and Latinos to whites in the areas of economics, health, education, the justice system and civic engagement.

“As this recovery develops, too many people are being left behind,” Morial said.

Meanwhile, the U.S. Department of Education trumpeted its report which revealed that graduation rates for black and Latino students increased by nearly 4 percentage points from 2011 to 2013, outpacing the growth for all students in the nation.

Also released on March 19, the education report revealed that the gap between white students and black and Latino students receiving high school diplomas has narrowed.

Still, with the nation’s overall graduation rate reaching an all-time high of 81 percent in the 2012-2013 school year, white students still graduate at a much higher rate than most other subgroups, at 86.6 percent.

Figures from the federal government show that Texas had the nation’s highest high school graduation rate for black and Latino students in 2013. Approximately 84.1 percent of black students in Texas graduated on time in 2013. The rate for Latinos was 85.1 percent.

High school graduation rates in Baltimore City have reportedly been steadily climbing since 2007, reaching a rate of about 70 percent three years ago. City officials said the rate compares favorably with other large cities and it enables local students more collegiate opportunities.

While Morial and Urban League officials say much more work lies ahead and the battle remains uphill, education officials say they like the way the graduation rates are trending.

“The hard work of America’s educators, families, communities and students is paying off. This is a vital step toward readiness for success in college and careers for every student in this country,” said U.S. Education Secretary Arne Duncan. “While these gains are promising, we know that we have a long way to go in improving educational opportunities for every student no matter their ZIP code for the sake of our young people and our nation’s economic strength.”