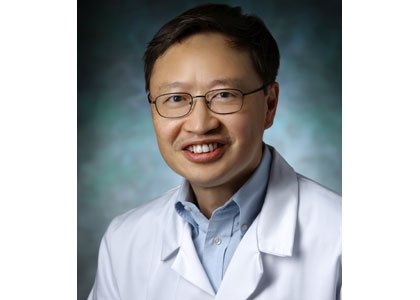 Dr. Linzhao Cheng and a team of researchers at Johns Hopkins University School of Medicine were able to correct a genetic error in stem cells of patients with sickle cell disease, then grow mature red blood cells in a lab. The researchers hope this will lead to an effective treatment option for patients who have sickle cell disease and who need frequent blood transfusions. Researchers also believe that the blood cells of healthy people who live in tropical environments could be edited to resist malaria. They intend to study the possibility. (Courtesy photo)

BALTIMORE — Johns Hopkins researchers were able to successfully correct the genetic error in stem cells of patients with sickle cell disease and grow mature red blood cells in a lab.

“The genetic editing approach can generate the red blood cells for the transfusion dependent patient. These are their own cells,” Linzhao Cheng, Ph.D., the Edythe Harris Lucas and Clara Lucas Lynn Professor of Hematology at Hopkins said. “It’s definitely a very important step and milestone for us to reach this objective.”

The only current cure for patients with sickle cell disease is a bone marrow transplant, which enables people with the condition to make healthy blood cells. It is difficult to locate bone marrow donor matches and transplants are not always the answer.

“Not everybody is a good candidate for bone marrow transplantation. We do need additional ways to treat sickle cell patients,” Cheng said. “The research is more for the future therapeutic research, so we hope to provide complimentary approaches, particularly for patients who are not qualified for the current either existing standard or the current available experimental therapies.”

Cheng estimated that 15 percent of sickle cell anemia patients need blood transfusions. In a March 10, 2015 press release issued by Johns Hopkins Medicine, Cheng explained that when patients receive blood transfusions over time, their bodies often begin to mount an immune response against foreign blood. While considering the medical needs of sickle cell patients, Cheng and a team of eight other researchers had an idea to grow blood cells in the lab that were matched to each patient’s own genetic material, although the sickle cell mutation needed correction. Researchers opted to start with patients’ blood cells and reprogram them into so-called induced pluripotent stem cells. They can grow indefinitely in the laboratory and also make any other cell in the body. The next step entailed use of CRISPR— a relatively new genetic editing technique that snips out the sickle cell gene variant and replaces it with the healthy gene version. The final step of coaxing the stem cells to grow into mature blood cells was successful. According to researchers, the edited stem cells generated blood cells just as efficiently as stem cells that had not been subjected to CRISPR.

Researchers can routinely correct the mutation of sickle cell patients, but Cheng explained that they still must overcome key hurdles.

"Probably, we need a couple of years for how to translate [this] in the clinical setting,” Cheng said.

Cheng mentioned that the process would have to be made more efficient and scale up, meaning that a large scale production of red blood cells would need to be made during translational research.

“The second [hurdle] of course is that it has to go through clinical trials for safety and efficacy through the FDA,” Cheng said.

A grant that lasted from June 2011 to June 2014 enabled researchers to make advances in the area of sickle cell research. Cheng stated that they are grateful to the Maryland Stem Cell Research Commission, which provided approximately $600,000 for lab research and an additional $150,000 to Johns Hopkins for supporting costs. Cheng applied for another grant with the Maryland Stem Cell Research Fund for the second stage of research that would focus on the translational stage.

“It is particularly critical to have this kind of funding,” Cheng said. “Hopefully the Maryland Stem Cell Research Fund will help provide funds for us to continue this translational research.”

About 10 years ago, the Department of Health and Mental Hygiene estimated that up to approximately 100,000 individuals living in the U.S. are affected by sickle cell disease. It was estimated that about 3,000 people living in Maryland have the disease.