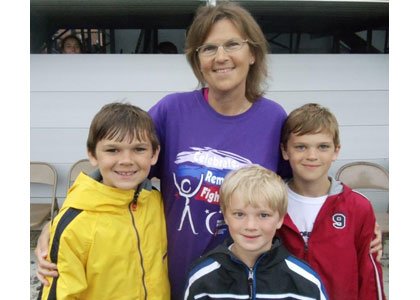 Bone marrow transplant recipient Linda Kosinksi and her children Ryan, Andrew and Gregory. Kosinksi recently visited legislators in the nation’s capital to ask that federal funds also go toward helping patients navigate the complexities of the health care system when preparing for transplant, as well as supporting research to discover and apply the best therapies and improve patient outcomes. (Courtesy Photo)

BALTIMORE — Transplanted blood cells from umbilical cords proved to be the key in helping to save the life of Baltimore area resident and leukemia patient Linda Kosinski. The married mother of three, who first received her heartbreaking diagnosis in 2007, was helped by the generosity and extensive donor registry of the nonprofit Be The Match National Marrow Donor Program.

“After going through several rounds of chemotherapy, the doctors determined that I needed a transplant. I have two sisters, but neither were a match,” Kosinski said. “At that point the doctors turned to ‘Be The Match.’”

Kosinski counts among the 70 percent of those seeking a blood transfusion who cannot find a match in their own family. Because of that, her doctors scoured the bone marrow registry, but still weren’t able to secure a match.

“One of the doctors suggested we look through a cord blood transplant which I had never heard of before,” she said.

In addition to a bone marrow registry, Be The Match also maintains a registry of cord blood donors, blood that’s preserved from the umbilical cord when a mother gives birth to a child.

“People just didn’t know about it and I certainly didn’t, but I was running out of options,” Kosinski said. The difference is that cord blood donors don’t have to match as precise as bone marrow and other donors, so Kosinski was able to receive a double cord transplant and she’s lived almost problem-free since.

“If you’re diagnosed with an illness that requires a bone marrow transplant, physicians can go onto our registry to see if there’s a match,” said Chad Ramsey, director of legislative relations at Be The Match. “The procedure is usually covered under the patient’s health insurance or Medicare and we’ve been doing this 27 or 28 years when it was first discovered that bone marrow transplants can be effective to treat leukemia and other blood cancers.”

About 14,000 individuals are diagnosed annually with a disease that requires a bone marrow transplant and Be The Match has a need to get individuals to their registry and to get a larger pool of donors, Ramsey added.

He said the organization works with blood banks around the country and patients and others can search those and, if there’s a match, they can use it. Ramsey said they are hoping for more cord blood donors to help close gaps in donations.

Kosinski has been doing her part in helping to raise awareness and to promote an increase in the federal appropriation that would allow the National Marrow Donor Program and Be The Match to recruit more donors and further expand the diversity of the registry.

She recently visited legislators in the nation’s capital to ask that federal funds also go toward helping patients navigate the complexities of the health care system when preparing for transplant, as well as supporting research to discover and apply the best therapies, and improve patient outcomes.

“I think it went well,” she said. “I met with legislators who seemed to really listen and understand what was needed.”

Linda explained that she had acute lymphocytic leukemia, a type of cancer in which a certain type of white blood cells prevents the body from making enough red blood cells and platelets.

“The increase in funding would help support efforts to improve patient access to the transplants that save lives,” she said.

Be The Match officials said it would also support efforts to include the recruitment of more minority mothers to donate their baby’s cord blood, giving more patients a second chance at life.

“I do see the tide turning,” Kosinski said. “There are more donors getting added every year and it costs money to get on registry and get tested. If we can get more money into the program it would really be fantastic.”