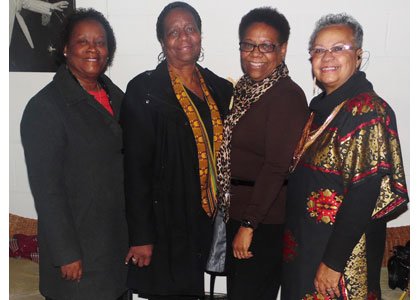 Hopes were high that the festival featuring musical performances, food, arts and crafts, African dance and storytelling will return to the City Dock and attract excited festival-goers who have missed the annual celebration. Around the site of the expected location, the statue of the late Alex Haley, author of "Roots," still reminds passersby of Kunta Kinte's arrival on the Lord Ligonier slave ship. In his groundbreaking book, Haley introduced the world to his ancestor who was sold into slavery. 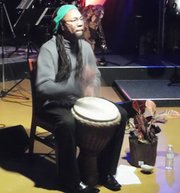 Terrell Freeman opens the event with a drum call.

Renee Spears, the current Kunta Kinte Heritage Festival chair, said that she has been working with the festival for 18 years. During the evening, she determined that the community's favorable response to the fundraiser indicates that it definitely needs to be held. A call for additional volunteers was also announced.

“The Kunta Kinte Heritage Festival is a very important event for Annapolis history-wise, because we all need to have a history, and to live it, and to breathe it, and for children to know it, and not just for us as African Americans, but for everyone,” Spears said.

“We’ve been successfully doing this festival for the last 25 years. Due to budgetary constraints, we weren’t able to have it the last two years. With the help of Jan (Lee) and some of the other festival members, we decided to have a fundraiser to try and spearhead getting some funds together for the 2015 festival,” David Arthur, president of the board of directors for Kunta Kinte Celebrations, Inc. said. “We definitely want to have a festival. This is the whole point of this. We want to make people aware that we are still trying to hold a festival, and that we are still here, and that we need everybody’s help to continue on.”

Community members like Terrell Freeman helped to facilitate the fundraiser. Freeman, an Annapolitan, welcomed attendees and opened the program with a drum call. Before introducing the first performers, he also conducted a libation ceremony to pay tribute to ancestors.

Jan Lee, 29, serves as co-chair of the Kunta Kinte Heritage Festival and handles media relations. Lee remarked that the organization is focusing on rebuilding after a two-year hiatus.

“We plan to return to the Annapolis City Dock for the festival on September 26, 2015. I’ve been volunteering with Kunta Kinte Celebrations since I was a kid. I feel that the festival is so important in bringing the community together. It's always a joyous celebration,” Lee said.

The Annapolis chapter of the Delicados, Inc. was instrumental in helping to present African Threads. Darlene Washington, president of the local social group, said that her group loved the fundraiser and display of superb talent.

“We were a sponsor group— an organization that sponsored this affair tonight. We want to see it (the festival) come back again. That was one of our interests in being a sponsor, to help so that this event would happen again this summer.”

To learn more about the status of the Kunta Kinte Heritage Festival as developments continue, visit: www.kuntakinte.org.