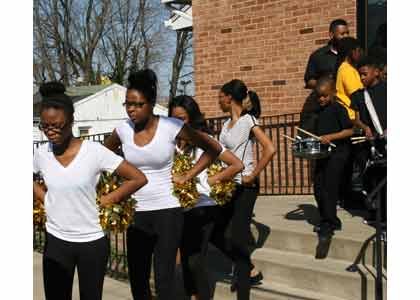 The band's founder and director Pat Montague says the event was held to raise money for new equipment, uniforms and various band expenses for the 85-member band.

The mistress of ceremony was Tityonna Jones a member of the pompom team and the ushers included band members Latajah Courtney and Ra'Shika Butler. The church was taken over by the youth band members as they welcomed the guests and delivered the prayer at the event.

The Gospel Fest included performances by the Annapolis Drum and Bugle Corps and local gospel artists including Sounds of Joshua, The Christian Cavaliers, First Samuel Gospel Band, The Souls of Joy, and Mitchellvilettes, plus a beautiful praise dance performance by Karen Beans.There was also a powerful rendition of “Take me to the King” by 10-year-old Josiah Fisher, who says he has been singing since he was two years old. He sings on a regular basis at his home church Asbury Broadneck. He is also a member of the drum and bugle corps where he is a percussion player.