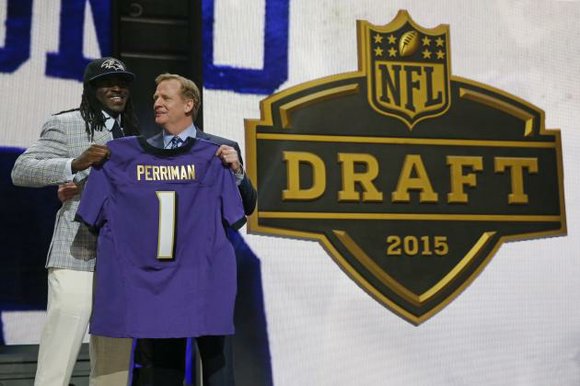 BALTIMORE — The Baltimore Ravens selected wide receiver Breshad Perriman from Central Florida with the 26th pick in the 2015 NFL Draft. Perriman was the fifth receiver selected in the first round. He impressed NFL teams when he ran a 4.24 forty at his pro day. He is a classic height, weight, speed prospect.

Perriman is known for his ability to stretch the field and take the top off of defenses. That’s something that really appealed to Newsome. Newsome said that a receiver with Perriman’s speed makes the other guys better because it will be hard to put the extra guy in the box with a guy that can take the top off the defense like him.

Perriman’s father Brett was a ten year NFL receiver having played with the New Orleans Saints and Detroit Lions. He registered a 1,000 yard season with the Lions. The blood lines and lifelong association with the game was appealing to the Ravens front office. “He grew up around the game with his father Brett, Michael Irvin and Bennie Blades. The game is not going to be too big for him.” Newsome said.

There have been some questions about some drops but Perriman said that is something that he has worked on. “I have to remind myself to stay with the ball, squeeze the ball and not always try to make the big play. Sometimes a first down is good, sometimes a completion is good. I’ve been working on that tremendously.” Perriman said.

Perriman told the Ravens front office that the concentration drops were the one thing that he wanted to work on as he transitioned to the NFL. Newsome attributed the drops to “a matter of focusing in on the ball and making sure that’s the number one thing.” He was also sure to reiterate that Perriman has all of the elements to be a solid receiver.

Head Coach John Harbaugh had his own take on the drops as well. “We were watching him for an hour this morning. We went through all of his catches, all of his not catches, all of his workout tapes that we had and came away feeling very good about his hands.” Harbaugh continued; “He has a certain number of drops but most of them were last year and the beginning of this year. Bobby Engram really had a feel for this guy and he pushed hard for him.”

Perriman was a prospect that the Ravens, specifically Ozzie Newsome identified early after he declared for the draft. Ravens assistant general manager said that the Ravens are excited about Perriman and that Newsome was the one that started the buzz. “Ozzie was the first to watch him and he called me to tell me that we need to watch this guy. I did and I saw a big fast physical stallion.” DeCosta continued; “He makes us a better football team. It was in February meetings, Ozzie was intrigued by what he heard and watched him. We got the report about his pro day which was very exciting. It was a good match for us. We got a guy with a tremendous amount of talent that will only get better.”

The Ravens had their wide receiver coach and the national scouting director at Perriman’s pro day. Coach Engram pushed for the speedy receiver and Perriman wanted to be a Raven. He said that the visit with the Ravens was his best visit by far and they were the team that he was wishing to go to. “It’s a great opportunity and I can’t wait to get there. It was a great shock when he called honestly. It was like a dream come true.” Perriman said.

He also said that he was really excited about Joe Flacco, calling him a great quarterback. The rookie receiver is also looking forward to working with Steve Smith Sr. which he said will be crazy because Smith has done great things in the NFL. Perriman will be introduced to the Ravens at a press conference tomorrow.