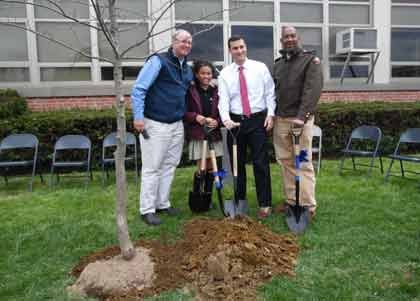 Horace Henry, Maryland Forest Service's urban and community forester for the southern region presented a 2014 Tree City USA Award to Annapolis for exhibiting excellence in urban forestry management. According to information provided by the Maryland Department of Natural Resources, the Tree City USA program is “conducted by the National Arbor Day Foundation in conjunction with the National Association of State Foresters.” For consideration of Tree City recognition, applicants must submit documentation illustrating the presence of a tree board or department, a tree care ordinance, a community forestry program with an annual budget of at least $2 per capita and an Arbor Day observance and proclamation. This year reportedly marks Annapolis’ 23rd year receiving a Tree City USA Award. A pin oak tree donated by BGE to Wiley H. Bates Middle School was planted at the event.

“I can’t win awards like this without the help of each and every one of you,” Mayor Mike Pantelides said to students. “Winning an award for the environment is so important because all of us share the environment together. Each and everyone one of us will get the same benefits of this tree.”

In addition to accepting the Tree City USA Award, Pantelides reminded students about the importance of environmental stewardship. Reading a proclamation for Arbor Day on behalf of the city of Annapolis and explaining the origin of the special day strengthened his message. Additionally, Henry cited benefits of planting trees like the Pin Oak. The forester reminded students that advantages of its presence will range from providing shade in the summer, to absorbing the carbon dioxide from the air, thereby reducing production of greenhouse gases.

“You are doing a wonderful job by planting this. You are helping to take care of your environment, your planet, and this planet is the only one that we have,” Henry said to students.

While Pantelides and other program participants raised awareness about taking good care of the Earth, students enthusiastically welcomed his visit. The Mayor of Annapolis pointed out long-term benefits of youth taking care of the environment.

“There’s lots of things in government and society that only affects certain people. We all breathe the same air, drink the same water, so it’s important. I think starting them at a young age, it’s good to be conscious about recycling and everything else, so they get in good habits for life,” Pantelides said at the close of the program.

Nina Larkins, a sixth grader who attends Wiley H. Bates Middle School, was selected to pick up a ceremonial shovel to toss dirt around the Pin Oak along with other participants. The 11–year-old student stood with her principal, Paul DeRoo, Pantelides and Henry as various attendees cheered. After her exciting experience, Nina said she wants to help the environment in her own backyard.

“We have a big back yard. I was thinking maybe I can go to a home store, get some seeds and plant them on my own, and it will help the environment, she said. ”