Ravens land a trio of prospects in the fourth round 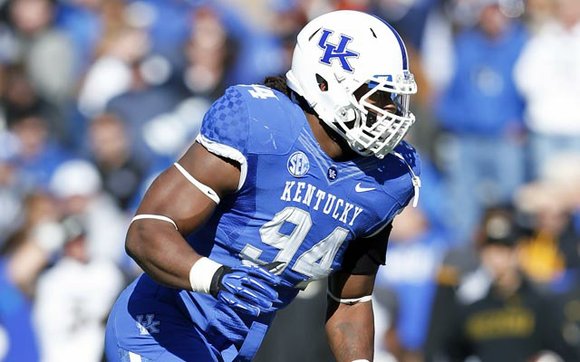 Smith continues a theme of draft picks with NFL bloodlines. His older brother, Bob Meeks played for the Denver Broncos and his cousin played for the New York Giants. (Courtesy U.K. Athletics)

BALTIMORE — The Baltimore Ravens continued to add talent to their roster and fill some needs in the fourth round. They had the 122nd, 125th and the 136th pick in the fourth round. Ravens general manager Ozzie Newsome and assistant general manager Eric DeCosta said that this is where they will make their draft. The Ravens came out of the round with Kentucky outside linebacker Za’Darius Smith, USC running back Javorius “Buck” Allen and Texas Southern defensive back Tray Walker.

There have been a lot of comparisons made between Za’Darius Smith and Pernell McPhee because of their ability to play multiple positions on the defensive front. They actually have a similar body type as well. Smith said that he watched McPhee a lot. “I really think that I can follow his footsteps and become like him. I can tell you this, a lot of people will be hearing about Za’Darius Smith as a Baltimore Raven. I will do the right thing and be the best pass rusher and run stopper that I can.”

The multi-talented defensive player talked about why he can play multiple positions like the departed Pernell McPhee. “Coming out of junior college, we ran a lot of 3-4. At Kentucky, we ran a 4-3. I have played in both systems and that makes me comfortable saying that I can play multiple positions.” Smith continued; “I feel comfortable playing outside linebacker standing up and I feel comfortable as a three technique with my hand in the ground.”

Despite having relatives that played in the NFL, Smith wanted to have a future in basketball. He realized that he was a good basketball player but figured out that it wasn’t for him during his senior year of high school. He played football his senior year and had eight or nine sacks. That year, he realized that football was what he wanted to do and as he says, “Look at me now.”

Buck Allen has a tremendous story. He faced multiple tragedies in his life, but each of them have been a stepping stone along his path to the NFL. Allen said that he had to fight to get what he wanted growing up. He said that he always had to figure out a way. It has showed him what he can and can’t do and he feels that it has molded him to do be who he is now.

Playing in the NFL is a lifelong dream come true to Allen. “As a little kid, this was a dream. To be there with my little brother and get the call from the Ravens was a blessing. I couldn’t ask for a better situation.” He explained how it is an unbelievable feeling to be where he is now. He knows that he has come a long way and it happened fast for him. “When it all calms down later and I can reflect on what me and my family went through to get to this point, I will just tear up and cry. It’s such a blessing.” Allen said.