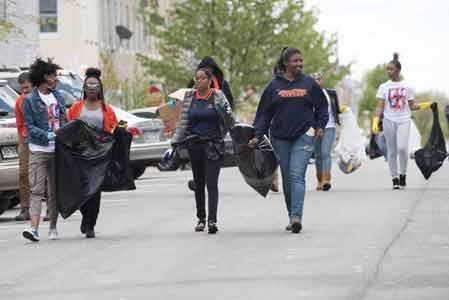 Morgan students on their way to assist with the clean up of community in aftermath of riots. (Photo: Larry Jones, Morgan State University)

BALTIMORE — Students from Morgan State University, local teachers, individuals who were out of school because of the closings and members of several fraternities methodically began cleaning the city after a violent night of rioting and looting.

In all, about 3,000 individuals— many joining the efforts on an impromptu basis— worked from dusk until dawn to help Baltimore reclaim its Charm City moniker and to let the world know what Mayor Stephanie Rawlings-Blake meant when she said, “We are One Baltimore.”

“We thought it was most important to let the community know that people are out cleaning,” said Kaeshawn Stewart, a Baltimore resident and a member of the Delta Sigma Theta sorority. “This is encouraging to the community and it’s giving the community hope because we’ve had many come by and say thank you.”

Anita Wade a school teacher and a member of the Zeta Phi Beta sorority worked arm-in-arm with Stewart as they cleaned a lot across from a playground and immediately around the corner from the flash point of activity at North and Pennsylvania Avenues.

Despite a low-hovering police helicopter and sounds of bullhorns and demonstrators clashing with police, Wade said cleanup efforts were important, particularly to set a positive example for young people.

“There are so many issues that are not being addressed, but our children need to see this [cleaning effort],” she said. “It makes things a little better.”

With a burned and destroyed CVS store, a multi-million dollar senior center destroyed and pure chaos serving as a most unfortunate backdrop, many residents displayed the spirit of true activism.

Melanie Diggs, the branch manager for the Pennsylvania Avenue branch of the Enoch Pratt Free Library helped to keep as many as 30 individuals safe as demonstrations turned to riots and the local CVS store was looted and burned.

With a broom and a dustpan in his hand as he helped clean on Tuesday, April 28, Robert Stokes shook his head when asked about the effects of the riots: “You look around and see unemployment. Filling out job applications and being turned down because of where you live and your demographic. It’s so much bigger than the police department,” he said. “This is a powder keg that’s waiting to explode.” But, Stokes and others attempted in earnest to diffuse that time bomb, simply by joining the efforts to show city pride, strength and solidarity by cleaning and otherwise lending a helping hand.

Baltimore City Public Schools were closed Tuesday due the previous night’s violence and many students had nowhere to go. A sign outside of Red Emma’s Book Store and Coffeehouse told students, “This is a safe place for Baltimore’s youth.”

Storeowners provided free lunch to all city children as efforts to restore peace and a sense of normalcy began.

CVS manager Haywood McMorris still lamented the fate of his store and told reporters that the destruction hurts those who work there and the residents of the area.

Cheryl Wright, another resident who lives nearby, listened as McMorris spoke. She said she understood his pain, but the efforts of her and others to clean up the city shows that there is hope.

“Look around you,” Wright said. “Look not at those yelling at cops, but look at how many are out here with brooms, dustpans, garbage bags. This is what gives all of us a reason to stay here and a reason to believe in the best of Baltimore.”

“The students decided to do this on their own,” said university spokesman Larry Jones. “They organized and initiated this on campus and on social media using the hash tag ‘MSU cleanup.’ We didn’t ask them to do this; they just wanted to help in the community.”

As some of the nearby demonstrators broke into song, performing Bill Withers’ iconic

Edna Cleveland, who lives blocks from the flash point, said all of it inspired her.

“It’s emotional. I wish that more people would get involved in cleaning up our city and then, when you hear the protestors singing ‘Lean on Me’ you hope that people realize that this is bigger than them. It’s bigger than riots and protests,” Cleveland said. “It’s about what is right and wrong and how to go about being a real community who knows how to genuinely stick together.”