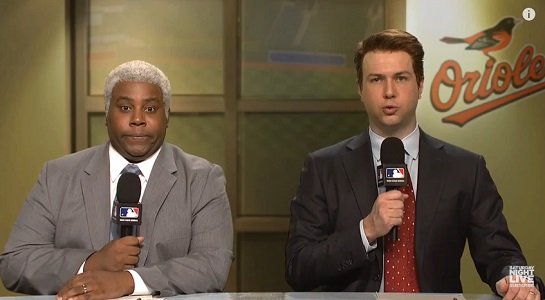 Baltimore Orioles announcers Jim Palmer (Taran Killam) and Frank Robinson (Kenan Thompson) try their best to call a game being played in an empty stadium without referencing the rioting.

And, as usual, the sketch comedy show did not shy away from hot-button issues in the news.

The show took on the situation in Baltimore, where protests broke out last week over the death of Freddie Gray in police custody. In a sketch about the Baltimore Orioles game Wednesday that no one showed up for, sports commentators tripped over euphemisms like "beating," while police in riot gear acted as stand-ins for the kiss cam.

Some viewers may have skipped "SNL" to watch boxers Floyd Mayweather and Manny Pacquiao face off. But those who tuned in to SNL saw a "pirated" version of the highly anticipated bout.

Of course, with Johansson hosting on the same weekend the new "Avengers" sequel debuts, SNL had to spoof her superhero character in the film. Here's what a feature-length movie about Black Widow might look like.

And, with Virgin Atlantic continuing to experiment with new features, Johansson played a robotic flight attendant for the airline in one sketch.