Wrapping Up the Ravens 2015 NFL Draft 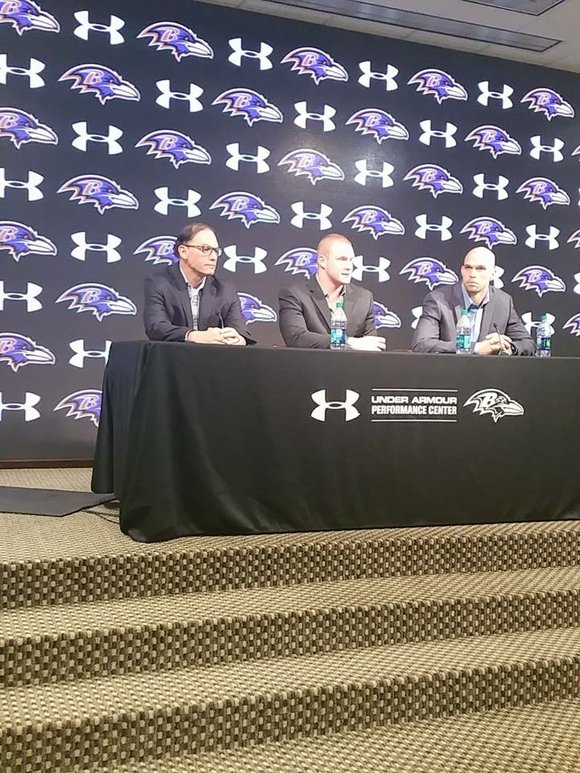 The Baltimore Ravens were able to field a pretty impressive group of prospects in the 2015 NFL Draft. They selected players that will replace some players that they lost to other teams via free agency. The Ravens made a concerted effort to select players that would fit into new offensive coordinator Marc Trestman’s offense. Trestman couldn’t keep from smiling as he talked about the new additions to the roster. The new group of offensive players also compliments the strengths of quarterback Joe Flacco.

Perriman is a serious deep threat that will be called upon to offset the loss of Torrey Smith. Smith and Perriman actually look very much alike when watching them play. The Ravens will need to take deep shots to Perriman down the field, which is a strength of Joe Flacco’s. Perriman’s ability to be a vertical threat opens up a lot of things for the offense.

Receivers coach Bobby Engram: “He puts pressure on the defense, and if he’s winning his one-on-one matchups, then the defense has to account for that. He has great size and speed. He has the ability to take a short gain and take it to the house. You see him working in the run game – all of the things that we’re going to ask him to do at this level.”

Williams is another Flacco friendly pick. He was the best receiving tight end in the draft. His ability to use his size in the red zone will be one area that the Ravens will look for a contribution from Williams right away. He said that the area of his game that he would like to improve upon the most is his blocking.

John Harbaugh: “I had watched [Williams on tape] – and I don’t call [DeCosta] too often – and I called him right away and said, ‘How about this kid at Minnesota?’ He’s really a good fit for our offense. He does – as Ozzie said – complement Crockett really well, and it works well for us in terms of what we want to do offensively.”

Carl Davis is a big lineman that played very well at the Senior Bowl practices. He will add to the depth on the defensive front. Davis is very good at taking on double teams and uses his hands to disengage from blockers.

Davis: “Oh my God, it’s ridiculous how I’m so motivated right now, because I was expecting to go somewhere … I feel like I’m one of the best defensive tackles in this year’s draft, and I saw a lot of guys that got picked ahead of me, and that puts a chip on my shoulder. And I feel like, especially when I’ve got a chip on my shoulder, there’s nobody that can stop me. I feel like I’m that much of a dominant player. Playing in this program for the Ravens, it’s going to be beautiful, because I feel like I’m going to be able to manifest all of my skills and live up to my potential. And I know I’ll get some great coaching.”

Eric DeCosta: “You see those size, speed defensive linemen … George Young used to call those guys ‘planet players’ because there are just so few of those guys that play at that size on the planet. Yes, it is unusual. Those guys typically go higher in the draft, especially a guy that went down to Mobile and played very well.”

Smith will fill the void left by Pernell McPhee going to Chicago. He dominated at the East-West Shrine game.

Smith: “I watched him [McPhee] a lot, and I think I can follow in his footsteps and become more like him. He just signed a new contract, and this team right here is replacing the other guy like Pernell McPhee. And I can tell you this: A lot of people are going to be hearing from Za’Darius Smith as a Baltimore Raven.”

Harbaugh: “He has the same hair, he has the same number – I think he picked No. 90 – so I’m not sure what that was all about. But he has the physicality, the heavy hands, and the high motor. He has pass rush ability even maybe more so than we saw from Pernell coming out. He has hips, and he can get around blocks. If he develops like Pernell did, we’re going to have something. He’s a great young man. He’s a very hard worker, and he plays really hard. So, those are all characteristics that Pernell has as well.”

Buck Allen is a back that takes pleasure in running over a defender or making a defender miss. He also is a very good receiving option out of the backfield.

Allen: “One of my biggest assets is that I have great hands out of the backfield. You never know what I am going to do. I am a run-over-you guy, speed guy. I have it all, I feel like, and it’s always hard for a defender to bring me down.”

Newsome: “He can play in all three phases. He is good with the ball in his hands as a runner, protections as well as a pass catcher. He will come in and compliment the backs that we have.”

Walker is a big corner that can also play safety. He fits the Ravens likeness for long corners that can press.

Walker: “I spoke with the cornerback coach when they came out to the personal workout, and they were overwhelmed by my size and my ability to move the way I can. And I just kept faith that I’d be somewhere, and I ended up some place where the most interest was there.”

Joe Horitz: “Our scouts that were down there came back and were raving about Walker’s performance down there – PBUs [pass breakups] every day, interceptions in practice, his size, and his length.”

Boyle is a big tight end that was surprisingly athletic during practices at the Senior Bowl. He will be primarily a blocking tight end but does have the ability to catch the ball on seam routes.

DeCosta: “Boyle had a good week at the Senior Bowl. He stood out, competed very well, and had a great week of practice. He looked athletic, blocked extremely well. He’s built strong. He’s an NFL body tight end, a point of attack tight end and it’s hard to find those guys.”

Myers was another Senior Bowl standout. He has nice size and adds depth on the interior offensive line.

Harbaugh: “Juan Castillo really likes his upside. He thinks Myers has a chance to develop into a starting offensive lineman in this league. We’ve had some success with small school guys in the past and we are pretty confident that we can do the same with Myers.”

Waller is a big receiver but he is very raw. The athleticism is there, he timed in the high 4.4s despite his size. Waller is a developmental player that receivers coach Bobby Engram will need to work on running routes with.

Newsome: “We all covet big receivers. He’s a big receiver, another big target for Joe [Flacco]. We know how tough it is facing receivers with that type of size down in the red area. He brings all of that.”