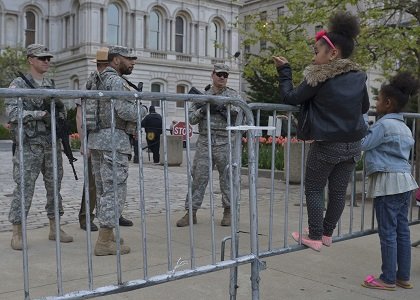 Two young girls talk to national guardsmen outside of city hall in Baltimore, Md., on Friday, May 1. (Photo: (Freddie Allen/NNPA)

BALTIMORE (NNPA) — Friday afternoon was clear and cool enough for a light jacket, although most people wore T-shirts and shorts in Baltimore, Md. The Inner Harbor and much of city hall grounds were barricaded with low metal gates and by 6 pm, the Inner Harbor was free from the lively weekend energy that a normal spring Friday after work crowd would bring. National guardsmen milled about, weapons down, some with stern gazes others talking in hushed, but relaxed tones.

Waiting for a CNN interview at City Hall, Neill Franklin, the executive director of Law Enforcement Against Prohibition, a group of current and former members of the criminal justice system that advocates for drug policy reform, said that the Baltimore city police officers charged Friday had multiple attempts to render aid and they failed to so even though Freddie Gray requested it.

“I’m not surprised, this is business as usual, unfortunately for many of the neighborhoods in Baltimore city,” said Franklin. “This time someone died, which has brought the attention to this type of behavior of our police officers.”

Franklin said that in 2005, after Baltimore police officers arrested more than 108,000 people, the state’s attorney’s office was forced to vacate roughly 20 percent of the arrest without filing charges because there was no probable cause for the arrest, similar to what happened with Freddie Gray.

“Hopefully, this is a turning point, I hope it is, but I think the Fraternal Order of Police missed an opportunity today,” said Franklin, referring to a statement that the Fraternal Order of Police (FOP) made shortly after State Attorney Marilyn Mosby announced charges would be filed against six police officers. “They can still say we support our officers and their families, but at the same time they should have said and yes we want to partner with you community to figure out a path forward to make sure that this doesn’t happen again.”

Franklin said that he feels bad for those police officers standing in the wings who want to to good and who are thinking maybe this is a turning point.

“Then you have the FOP say this nonsense,” said Franklin.

Franklin said that he hopes that residents come together with city officials and members of law enforcement to do an assessment of the police department, body-worn cameras and ways to protect officers who want to come forward when they witness fellow officers behaving badly.

Jhanee Braswell, 26, a resident of Baltimore’s east side, said that Baltimore needed the riots and the national media attention because the policed officers simply don’t care.

Braswell said that she was surprised that the state’s attorney’s office filed charges so soon. So many people get shot and killed everyday.

Braswell said that this is just another situation where things would have blown over without the cell phone footage of Gray’s arrest and the riots last Monday.