Ed Reed Retires as a Raven 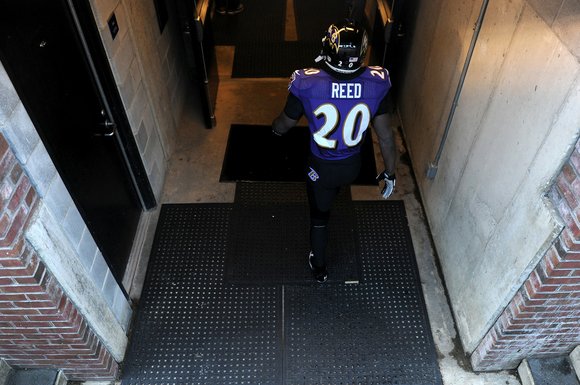 “I love the city of Baltimore, I love this organization and I hope that I have done more than when I was supposed to. It's a great day. I am really appreciative of the Ravens family.” – Ed Reed (Courtesy Baltimore Ravens)

BALTIMORE,Md. — With that, Ed Reed officially retired as a Baltimore Raven after 12 years in the NFL. He was the 24th selection in the 2002 NFL Draft. Reed’s five interceptions led the Ravens during his rookie year and he repeated that feat many years thereafter. The Ravens can thank the University of Miami for the two players that reinforced the team’s brand of defensive football. Reed and Ray Lewis were a staple for the Ravens.

In 2004, Reed was named the NFL Defensive Player of the Year by the Associated Press and the Pro Football Writers of America. He set an NFL record for most interception return yards (358) that year. Reed had nine interceptions in 2004 as well. The 2004 season was a record setting year for Reed. He set a record for the longest interception return for a touchdown when he had a 106 yard return against the Cleveland Browns. That record was later broken by Reed himself in 2008 when he had a 107 yard interception return against the Philadelphia Eagles. He capped off that brilliant season by becoming the only player in Pro Bowl history to block a punt and return it for a touchdown.

Reed retires with numerous NFL records including the most games with multiple interceptions (13) and the all-time interception return yards (1,590). He is an Reed has scored a total of 13 touchdowns in his career with the Baltimore Ravens — 3 blocked punts, 1 punt return, 2 fumble returns and 7 interception returns. Here is a look at all of the NFL and Ravens franchise records held by Reed:

• First person in NFL history to return an interception, punt, blocked punt, and fumble for a touchdown

• Most interception-return yards in a single game (150)

Reed was known for his ability to diagnose routes and jump them to make game changing interceptions that resulted in a return for a touchdown. Quarterbacks were always sure to make sure that they knew where #20 was on the field. Reed’s final game as a Raven was Super Bowl XLVII when the Ravens secured a Super Bowl championship. Fittingly, one of the momentum changing plays in that game was an interception by Reed.

The Ravens will honor Reed by naming him to their Ring of Honor and retiring his number 20 in the franchise’s 20th anniversary season. His jersey will be retired on November 22 when the Ravens host the St. Louis Rams. The Pro Football Hall of Fame committee will have a decision to make in five years when both Reed and the recently retired Troy Polamalu are eligible to enter the Hall of Fame.