Annapolis organization pitches in with others to help Baltimore 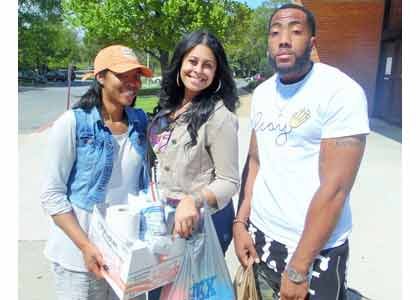 Annapolis and Anne Arundel County residents like Morgan Staley (left), Octavia Brown (middle), and Ivan Morris, Jr. (right), have not forgotten Baltimore in a great time of need. They collected donations at Annapolis Regional Library on West Street on May 2, 2015. Brown and volunteers also helped to clean up Baltimore. (Photo: Andrea Blackstone)

Octavia Brown was at the University of Maryland, Baltimore (UMB) wrapping up her final week of school in preparation for graduating with a Master’s in Social Work, when chaos erupted in the city on April 27, 2015.

“I had one last paper to do, but I was so emotionally connected to what was going on in Baltimore City that I couldn’t even focus on finishing my final paper. I ended up being very involved with trying to get donations together and collaborate…to help out as much as I can. I ended up doing my paper the night before,” Brown said.

Baltimore is like a second home to Brown and with members of EOCC and fellow classmates at UMB, they volunteered to clean up on Pennsylvania and North avenues. The No Boundaries Coalition, a community organization in Baltimore, led the effort.

“Me and Landis Harwell went to clean up in Baltimore City and donated food to the No Boundaries Coalition,” Brown said.

Brown wanted to do more to help Baltimore. She notified Facebook friends that donations to assemble care packages would be accepted through EOCC. In response, her home became a drop-off point. She picked up items from Broadneck High School classmates who have stayed in touch. Other volunteers who did not know Brown personally began to emerge, too.

Anne Arundel County residents like Ivan Morris, Jr. met Brown with donations in hand on Saturday, May 2, 2015. He happened to see Brown’s call to action on social media and was the first person to respond to Brown’s weekend effort. Morris ended up helping to accept donations at Annapolis Regional Library on West Street.

“I am always down to support any cause giving back to the community,” Morris said. “The whole week when all of the incidences were happening, I was just looking for anybody or any outlet. I was just praying to God for something to do. I went to prayer rallies at my church, but I wanted to physically give something to the city of Baltimore.”

Morgan Staley—a member of EOCC and longtime friend of Brown—waited for cars to drive up to drop off donations in front of the library, along with Brown and Morris. Just before the trio loaded bags and boxes into Brown’s car, another car drove up to donate additional items. Before their departure, Brown’s movement to help Baltimore had grown to a trunk full of donations.

By Monday, May 4, Brown collaborated with Julie Drake, a professor at UMB, and a fellow student who helped to collect donations in a student lounge. Drake had been helping to support first responders in Baltimore, so Brown decided to divide donations that were collected in Annapolis between police who had been working long hours on the streets, and residents who live in West Baltimore.

Through her network, Brown connected with Reverend Edward Robinson, the CEO of Agape House on North Dukeland Street in Baltimore. He confirmed that area residents have been greatly affected. Drug stores have been burned down in what Robinson described as “a very deprived community.” Agape House is an outreach ministry center offering a comprehensive feeding program and food pantry that is utilized by community members in need each Wednesday. According to Robinson, many residents living in the area where he serves do not have transportation to travel to stores that are located long distances away from home.

“We’re adjacent to a public housing complex,” Robinson said. “A lot of food and personal hygiene items are needed. We’ll distribute them this Wednesday from our pantry.”

Donations will be put to good use but as Brown explained collecting donations is not enough to solve long-term problems so she invited Baltimore City leaders and Annapolis leaders to meet together in Annapolis to make changes in both cities. A collaborative meeting was held on May 6 at the American Legion Cook-Pinkney Post No. 141 on Forest Drive in Annapolis.