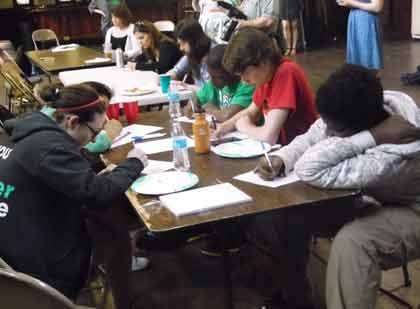 Students and adults at the write-in. (Photo: Andrea Blackstone)

BALTIMORE — After five days, Sunday, May 3, 2015 marked the day that Baltimore’s curfew was lifted and the National Guard began to leave the city. Six officers were charged in the death of Freddie Gray a few days prior. Protests, looting, rioting and police brutality attracted constant media coverage. But where could youth in Baltimore turn to be heard and cope without the threat of unrest?

Kelly McNeely listens to her 16-year-old daughter, Jaida Griffin recite her original poetry at the “Black Words Matter” write-in, which was held on Sunday, May 3, 2015 in Baltimore.

On the same Sunday, an impressive lineup of Baltimore’s young writers was granted a quiet space to write poetry and dissect multi-layered conversations about race. The forum for low-income middle school students to express themselves on paper has existed since 2008, when Patrice Hutton founded Writers in Baltimore Schools (WBS). The program primarily serves students through summer camps and weekly writing workshops.

Pizza, poetry and mentorship intermingled in an old church located at 2640 Space on St. Paul Street. Approximately 15 contributing volunteers like Dora Malech, an assistant professor of poetry in the writing seminars program at Johns Hopkins University assisted the students, during a write-in called “Black Words Matter.”

Khaliah Williams, a teacher who works at Friends School of Baltimore assigned writing prompts that fostered self-expression. Students stood to share words that erupted into thoughtful prose. Various guests, like Lawrence Brown, an assistant professor in the school of public policy at Morgan State University listened to heartfelt expressions that were shared by youth.

“I think it was cathartic. I think it was more a step toward healing. This is trauma that I think we’ve all gone through, particularly those black youth that were in there,” Brown said.

Poetry authored by youth will be added to the blog, http://blackwordsmatter.org, where students in Baltimore have previously written poetry about Ferguson, Michael Brown, Eric Garner and Tamir Rice.

Kelly McNeely accompanied her 16-year-old daughter, Jaida Griffin, who attends The Bryn Mawr School, a predominantly white private school. Jaida revealed that she had not had an opportunity to discuss recent events. The mother and daughter quietly wrote alongside each other, but when Jaida revealed thoughtful words, her mother listened.

“Behind the camera they tell you that blue lives matter, and new lives matter, but tell me, does mine?” Jaida said, as she ended her poem.

“I came with her to hear about how she was feeling about what was going on, and to see how other kids felt. I just really want to make sure that my child is not out here trying to do stuff the wrong way. That she still knows he has a voice and that her voice is to be heard,” McNeely said, reflecting on events where youth clashed with police at Mondawmin Mall.

Sharing poetry helped some attendees to feel acknowledged. Nekia Hampton, 21, a senior who attends the University of Baltimore, found out about the event through a coworker. Hampton said that others do not typically listen to young people, or appear to care what they have to say, if they are not located in the Inner Harbor or Fells Point area.

“There are lot of people who don’t get these opportunities because they haven’t been reached out to,” the West Baltimore resident said. “I think this was useful to me because I’m going to take this back home and try to share it with people who were not here or couldn’t get there but needed to know about it. It’s nice to be around people who feel kind of the same way as me. Even if they don’t, they have their own perspectives that I can respect. I love when Baltimore comes together as a community.”

Hampton attended peaceful protests, helped to clean up Penn-North after the riots, and visited Franklin Square Elementary/Middle School. She wants to focus on connecting with younger people to help them to process feelings in a positive way.

Hutton and volunteers have also been investing in youth on an ongoing basis. The poetic forum began with Hutton— a graduate student finishing up her masters degree in writing at Johns Hopkins University. She serves as the fulltime director of WBS.

“We run creative writing workshops in Baltimore City Schools on middle and high school level. In the past year…this group of high school kids called ‘Black Words Matter’ really formed themselves. This is the second write-in they’re holding,” Hutton said. “We just want to give students a space to talk about these things. Hopefully, this is just the beginning of a conversation.”