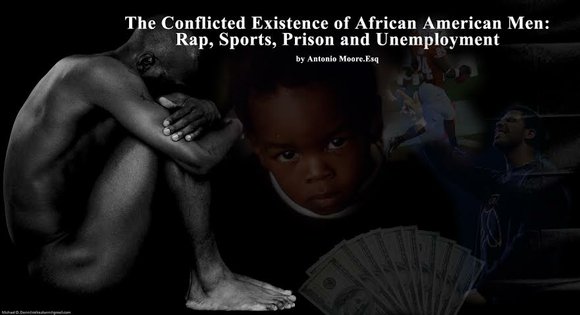 Piece on the reasons behind black males struggles. (Courtesy Photo)

Today no group is more misrepresented in the American conscious than African American males. Their presentation in media is a glamorous image of Grammy Awards and NBA MVP statues. But their reality is one of failure unlike any other subgroup in all of America. Black maleness holds a bastion of unemployed, imprisoned and homeless. Our nation, not only forgot these men, it created their pseudo image as a placeholder for our country’s history. An image that has been painted with a cover of NFL logos and rap stars making millions of dollars. All as an optical illusion to accept our own conscious need to see this failure as personal, and not systemic. #AllHipHop "

The idea that he didn’t try hard enough, is much easier to accept than the reality that no matter how hard he tried his fate was decided once his race and gender were chosen. Unable to shake the shadow that comes when you force-feed a country a false delusion, these young men are now lashing out, in Ferguson, Baltimore and so many other cities. This is the result when you tell a country with the history of ours, “Everything is okay, as long as we have a singular Floyd Mayweather, or the rising of a President Barack Obama.” All the while failing to create systemic answers to the unresolved problems that were created by hundreds of years of oppression...

Behind this image working class black men pressured themselves to make it in ways not seen prior. Creating alter egos that could be framed in the light of a superhero. Forming fanciful places where they would one day become rappers, or basketball players, instead of everyday fathers or workers at the corner store. All this while even the corner store wasn’t giving them full-time work. To live in such a world of delusion is so very different than the America experienced by everyone else. That world is full of normal teachers, secretaries and every day people. Instead this is a world where our poorest pressure themselves to become millionaires or bust, ignoring the fact that while money multiples it does not appear out of thin air.

While the few playing on the Milwaukee Bucks make millions in the NBA playoffs and are shown across the globe on TNT, Milwaukee as a city sees its rates of unemployed black males between 16 and 54 at rates over 50%. As the Los Angeles Clippers play at Staples Center on ABC, thousands suffer in its shadow on Skid Row only a few blocks away from the Los Angeles arena. (Skid Row has the highest concentration of homeless in the nation. The population of which is predominately homeless black males).

This is the conflicted place where African American men exist, from Baltimore to Ferguson and beyond. This economic trap has created a monster of a problem that is bubbling and will burst upon all of our cities if unresolved.