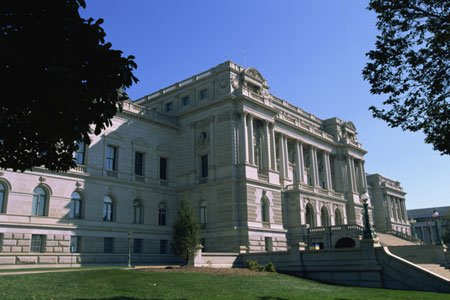 The Library of Congress in Washiington, D.C.

The Library of Congress has launched its annual summer essay contest, in conjunction with public libraries in the Mid-Atlantic region, to encourage rising fifth and sixth grade students to reflect on books that have made a personal impact on their lives.

The "A Book That Shaped Me" Summer Writing Contest is administered as part of summer reading programs at participating public libraries in Washington, D.C.; Maryland; Virginia; Delaware; Pennsylvania; and West Virginia. Prizes will be awarded and top winners will be invited to present their essays during a special presentation at the Library of Congress National Book Festival, Saturday, September 5, 2015 at the Walter E. Washington Convention Center in Washington, D.C.

The festival (www.loc.gov/bookfest) will mark its 15th anniversary since its establishment in 2001. The theme of this year’s festival is "I cannot live without books," a famous statement by Thomas Jefferson.

Students entering 5th and 6th grades in the fall of 2015 are eligible. Essays, focused on a single book, should be one page in length and must be submitted with an entry form, in person, at participating public library locations. The deadline for entries is Friday, July 10, 2015.

"A Book That Shaped Me" will award prizes to five finalists and one winner per state, and to three overall grand-prize winners. The 30 finalists will be selected by a panel of scorers composed of members of the American Association of School Librarians, a division of the American Library Association. Three grand prize-winners will be selected by a panel of judges assembled by the Library of Congress, including educators, children’s authors and Library of Congress staff.

Submission forms are available at the Library of Congress Young Readers Center in Room G-29 of the Thomas Jefferson Building, 10 First St. S.E., Washington, D.C., or at participating public library locations. The list of participating libraries is available at www.loc.gov/bookfest/kids-teachers/booksthatshape/.

Launched in 2012 with the D.C. Public Library, “A Book That Shaped Me” has since expanded throughout the Mid-Atlantic region with the help of public libraries in Washington, D.C., Maryland, Virginia, Delaware, Pennsylvania, and West Virginia. More than 300 public libraries are registered to participate in this, the fourth program year.

More information is available at www.loc.gov/bookfest/kids-teachers/booksthatshape/.