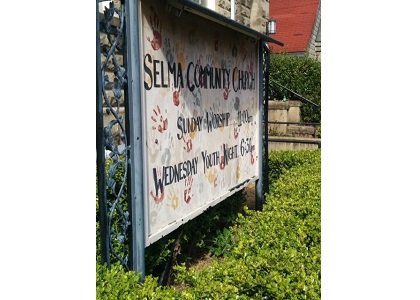 This is a picture of the Selma Community Church sign in Selma, Alabama on Sunday, March 8, 2015 (Photo: Katelyn Petroka/CNN)

(CNN) — Christian life is a set of sacred traditions -- an unbroken circle, in the words of an old hymn -- connecting generations of Sunday school stories, youth ministry morals and family gatherings sanctified by prayer.

In modern American life, that circle may not be completely severed, but it is wobbly and severely bent, according to a new landmark study conducted by the Pew Research Center.

Released Tuesday, the survey of 35,000 American adults shows the Christian percentage of the population dropping precipitously, to 70%. In 2007, the last time Pew conducted a similar survey, 78% of American adults called themselves Christian.

In the meantime, almost every major branch of Christianity in the United States has lost a significant number of members, Pew found, mainly because millennials are leaving the fold. Nearly one-third of millennials now say they are unaffiliated with any faith, up 10 percentage points since 2007.

The alacrity of their exodus surprises even seasoned experts.

"We've known that the religiously unaffiliated has been growing for decades," said Greg Smith, Pew's associate director of religion research and the lead researcher on the new study. "But the pace at which they've continued to grow is really astounding."

It's not just millennials leaving the church. Whether married or single, rich or poor, young or old, living in the West or the Bible Belt, almost every demographic group has seen a significant drop in people who call themselves Christians, Pew found.

The drops have been deepest among two of the country's most formidable faith traditions: Catholics and mainline Protestants, so-called for their prominence in American history. At the same time, Hinduism and Islam, religions tied to recent immigrants, according to Pew, have made small but significant gains. While they have declined as a percentage of the overall population, the number of evangelicals has remained relatively steady in the past seven years.

Because the U.S. census does not ask questions about religion, Pew's survey, called "America's Changing Religious Landscape," provides one of the most reliable sources of data about the country's religious demographics. Based in Washington, Pew calls itself a nonpartisan "fact tank" and regularly produces vast and detailed studies of religion.

People who profess no faith affiliation -- often called "nones," as in "none of the above" -- now form nearly 23% percent of the country's adult population, according to the Pew study. That puts the unaffiliated nearly on par with evangelicals (25.4%) and ahead of Catholics (about 21%) and mainline Protestants (14.7%).

Seven years ago, according to Pew's previous study, the unaffiliated formed about 16% of the population, mainline Protestants were about 18%, Catholics were about 24% and evangelicals 26.3%.

Looking at the long view, the generational spans are striking. Whereas 85% of the silent generation (born 1928-1945) call themselves Christians, just 56% of today's younger millennials (born 1990-1996) do the same, even though the vast majority -- about eight in 10 -- were raised in religious homes.

To put it simply: Older generations of Americans are not passing along the Christian faith as effectively as their forebears.