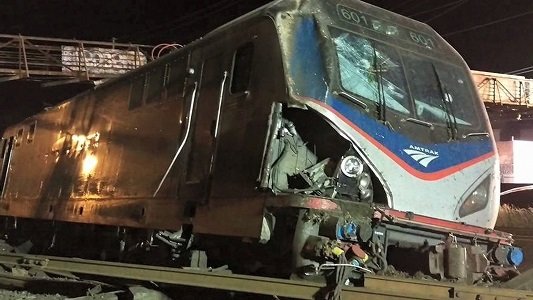 WASHINGTON (CNN) — A House panel approved a measure Wednesday that cuts funding for Amtrak, less than a day after a train derailment left at least six people dead and many more injured.

The Republican-led House Appropriations Committee voted 30-21 on party lines to advance the bill after rejecting a Democratic amendment that would have increased funding for the passenger railroad by $1 billion to $2.4 billion. Republicans argued that such a spending increase would need to be offset but cuts elsewhere in the budget, and they admonished Democrats for pointing to the derailment in an effort to increase Amtrak funding.

"Don't use this tragedy in that way. It was beneath you," Rep. Mike Simpson, R-Idaho, said to Democrats.

The derailment late Tuesday in Philadelphia is renewing focus on how the U.S. funds and maintains infrastructure. Amtrak has become a political hot button in recent years as Republicans have sought to reduce the rail service's funding and focus it more on the popular Boston to Washington Northeast Corridor.

In March, the House approved legislation that would authorize Amtrak to pump more money into the Northeast Corridor route but that measure has yet to muscle its way through the Senate.

And the panel approved a broader bill that would reduce grants to Amtrak by $252 million -- a drop of about 15% from last year's level. The cut would apply only to Amtrak's capital spending and would not touch funding levels for safety and operations.

Rep. Chaka Fattah, D-Pennsylvania, proposed a boost that was rejected by the Republican-led committee on a 30-21 vote as the panel marked up a transportation funding bill. Republicans argued that specific funding increases like one for Amtrak must be offset by cuts elsewhere.

In a separate House transportation panel hearing on Wednesday, Democrats like Rep. Peter DeFazio of Oregon complained about those cuts, saying majority Republicans should be "cognizant of the real world out there, of what happened last night, of what the capital needs of Amtrak are, and will not engage in short-sighted budget cutting."

Republicans also brought up the derailment, but in more general terms, saying it needs to be studied.

"It's critical we find out exactly what happened out there and make sure we take the appropriate response to make sure it doesn't happen again," said Rep. Mario Diaz-Balart, R-Florida.

White House Press Secretary Josh Earnest said Wednesday on CNN's "New Day" that investing more in transportation infrastructure "is a common sense" decision and said investing in Amtrak should not be a partisan issue.

Vice President Joe Biden, perhaps the most famous Amtrak fan in the country, issued a statement saying that "the victims could have been any one of our parents, children, or someone from one of our communities. Amtrak is like a second family to me as it is for so many other passengers."