Pugh says Alumni Award mans more to him than a Grammy 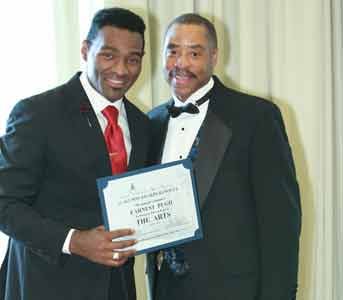 The Howard University School of Divinity Alumni Association honored Gospel Star Earnest Pugh (best known for the #1 gospel radio hits “I Need Your Glory” and “Rain On Us”) alongside five other distinguished alumni at a lavish banquet ceremony this past Sunday at Howard University’s Blackburn Center. Alumni Association President Dr. Robert G. Childs, who was one of Pugh’s Divinity School professors, presented the soul-stirring, five-octave singer with the Alumni Award for the Arts and said, “It’s no surprise that Earnest became a professional singer because he was always singing around campus.” Pugh, who graduated from the school of divinity in 2004, confessed that, “this means more to me than a Grammy Award because it came from my alma mater.”

After a concise and humorous acceptance speech, Pugh launched into a riveting concert that commenced with the rousing “I Praise Your Name” that brought the audience to its collective feet. Pugh made mention of the recent Baltimore riots and segued into his concert staple “Perfect Peace.” Pugh then sang his signature songs “Rain On Us” and “I Need Your Glory” and sang them with such a blazing fire that it’s a wonder no one called the fire department to extinguish it. The show concluded with a medley of heart-thumping and thought-provoking hymns that left tears dripping down many cheeks. The concert proceeds go to the Alumni Association’s Scholarship Fund.

Dr. Pugh lived in the DMV area for over a decade until his recent move to Houston, TX where he’s the Worship Pastor at The Lighthouse Church. While in the DMV, Pugh was a member of the music department at Ebenezer A.M.E. Church in Ft. Washington, M.D. and earned a master’s of divinity degree from Howard University’s School of Divinity while continuing his successful recording career. Last year he was awarded an honorary Doctorate of Divinity in Christian Counseling from The Institute for Teaching God’s Word in Rockdale, TX.