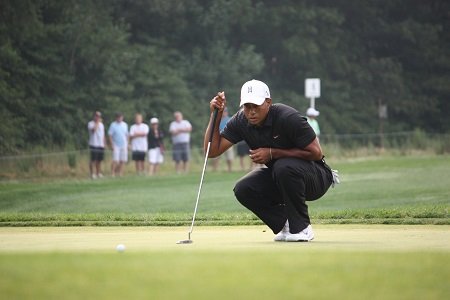 (CNN) — Tiger Woods may have been in the media spotlight for all the wrong reasons recently, but an act of kindness by the beleaguered golf star has attracted global attention.

The former world No. 1, who split from girlfriend and skier Lindsey Vonn this month and is struggling with his game, took time to offer words of support to a kid suffering with a stutter.

The 14-time major winner sent a personal letter of support to a teenage boy named Dillon after LPGA player Sophie Gustafson brought his story to the attention of Golf Digest journalist Ron Sirak.

Dillon had been driven to attempt suicide after classmates bullied and taunted him over his stutter, a condition Gustafson has struggled with throughout her successful two-decade professional career.

Having read the story, Woods, a stutterer himself in his youth, immediately sent off the letter after his camp contacted Sirak to ask for Dillon's home address.

"I know what it's like to be different and sometimes not fit in," Woods wrote. "I also stuttered as a child and I would talk to my dog and he would sit there and listen until he fell asleep."

"You have a great family and big fans like me on your side. Be well and keep fighting. I'm certain you'll be great at anything you do."

Gustafson, who has been mentoring Dillon, was delighted with Woods' rapid response upon learning about Dillon's plight.

"Tiger sent Dillon a letter and told him he also stuttered when he was younger," the Swede said in a text to Sirak, the journalist reported. "He's ecstatic. It was real class to get that out so fast."

Dillon has since replied to Woods' letter by sending an email to Sirak, in which he said he would go to his first golf tournament once his leg has healed -- it was fractured during his suicide attempt.

"On Saturday, I got a letter from Tiger!" he wrote. "He told me that he used to stutter too. We are going to frame the letter. We have never seen a golf tournament in person, only on TV. I told my mom that when my leg gets better I think that would be a fun thing to do.

"I hope that maybe one other person out there that is also having struggles, will hear my story and realize suicide is not the answer and maybe it can help them."