How to dwarf a giant

For starters, stop mentioning its name at every turn 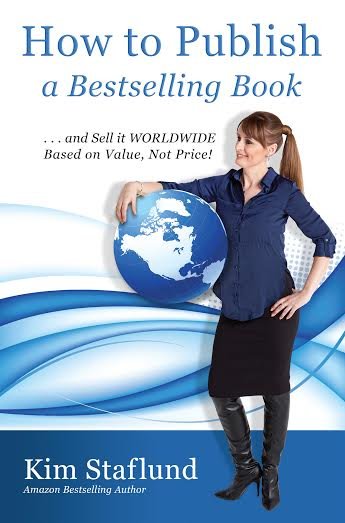 Kim Staflund shows authors how to sell their books using all the effective traditional and online tricks of the trade. (Courtesy Photo)

In November of 2014, a soldier on the traditional side of this battle was victorious in negotiating a deal that allows trade publishers the continued right to dictate their own recommended retail prices for the books they produce. This has always been the relationship between manufacturers and their retailers, as it should be. The manufacturer (publisher) knows its own production costs and, therefore, sets its recommended retail price based on those costs. The retailer, in turn, lists the item at that suggested price and may or may not provide discounts to their buyers based on their own projected profit margins.

Despite this win, Preston is still concerned.

“The main problem hasn’t gone away,” he told Publisher’s Weekly. “When one company controls 50 percent of the market, and it has proven itself to be ruthless and uncaring with authors, that’s a problem. We don’t want this to happen again.”

His solution is to continue drawing attention to the problem in 2015 by sending a formal complaint to the Department of Justice citing possible antitrust issues which will surely keep this retailer in front-page news for several months to come.

Does anyone remember the movie The Golden Compass? Do you recall all the extra press coverage this movie received back in 2007 when the Catholic Church condemned it for sending an anti-religious message? By calling for a public boycott of the film, the Church actually drew even more attention to it, which inadvertently boosted its sales. That’s why I bought my ticket. I wanted to see what all the fuss was about.

By the same token, if the goal of Authors United is to dwarf a retail giant that has grown too big for its britches over the years, perhaps a more effective tactic would be to stop mentioning its name at every turn. Change the focus altogether.

There are many exceptional retailers around the world that will happily sell various book formats for their clients without exclusivity contracts while also letting those publishers (self-publishers) determine their own recommended retail prices. How about rewarding these allies by referring customers to buy books from them instead of giving all the focus and energy to a perceived adversary?

There are also many potential customers out there with different motives for buying various types of books. Some people make buying decisions based on price while others make buying decisions based on value. There is a time and a place for both types of marketing. It all depends on your book’s customer base and what will speak to them most. Trade published authors and self-publishers alike should do the necessary research to understand what their customers want, rather than blindly choosing one form of marketing over the other based on the viewpoint of one retailer. It is your customer’s wants and needs that should determine your marketing strategy.

Value-based selling is far from being a new concept, even if it’s a bit foreign to some within the book publishing industry. If it can be used to sell a car, a clothing item, or even a cup of coffee, it can be used to sell a book. And, it can result in a higher profit for the copyright owner of that book while providing more value to the buyer. It’s all just a matter of a little education.