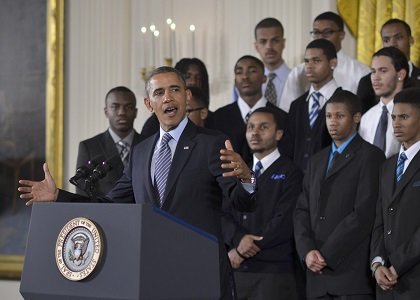 WASHINGTON (NNPA) — While political pundits rush ahead to the 2016 presidential election, President Barack Obama is rallying private-sector, philanthropic and community leaders to launch an independent non-profit to ensure that the My Brother's Keeper (MBK) Initiative lives past his second term in office.

That initiative and its mission to expand opportunities and improve life outcomes for young men and boys of color will live on as the My Brother's Keeper Alliance.

During the launch ceremony of the Alliance at Lehman College in West Bronx, N.Y., President Obama said that the group aims to double the percentage of boys and young men of color who read at grade level by the third grade, increase their high school graduation rates by 20 percent and get 50,000 young men into college or post-high school training.

“I notice we don't always get a lot of reporting on this issue when there's not a crisis in some neighborhood. But we're just going to keep on plugging away,” said President Obama. “And this will remain a mission for me and for Michelle not just for the rest of my presidency, but for the rest of my life.”

The MBK Alliance will also develop a guide to help mobilize private sector leaders to address the myriad challenges facing young men of color and provide $7 million in grants to evidence-based programs and another $15-$25 million to support communities in building capacity for those programs and local infrastructure.

In a letter to supporters and community stakeholders, Broderick Johnson, the chair of the My Brother's Keeper Task Force at the White House, said that he looked forward to the focus that the Alliance would bring to tearing down barriers facing underserved and at-risk youth.

Johnson said that the task force is working with the Education and Health and Human Services Departments to address the disproportionate impact of preschool suspensions on students of color and with the Labor Department to help young people gain work-related skill on a pathway to careers.

Johnson also noted that the Justice Department the President's Task Force on 21st Century Policing are working to promote community-oriented policing practices and to improve life outcomes for young people that encounter the criminal justice system.

Leroy Hughes, Jr., the interim executive director of Concerned Black Men National, a group that provides mentoring programs and supports career and academic achievement for young boys of color, said that instead of just throwing funding at the issue, building a strong foundation through the initiative, defining the problems and likely solutions in two separate reports and issuing the community challenge last year helped to put all of the pieces together for a long-term strategy.

“I think it was a smart move, because they can actually talk about real issues affecting Black men and boys now,” said Hughes.

And addressing those issues can lead to real economic benefits for the nation.