Will.i.am tells kids: Dream of being Steve Jobs, not me

Grammy-award winning artist will.i.am wants to inspire inner city youth to pursue careers in science and technology, not MTV and the NBA 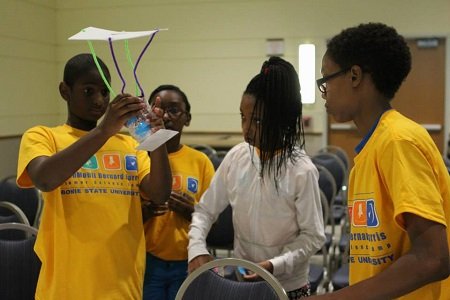 NEW YORK (CNNMoney) — Will.i.am is on a mission to inspire inner city youth to embrace science and technology.

The former front man for the Black Eyed Peas is hoping poor minority children will be inspired by his career makeover from musical artist to tech entrepreneur.

Will.i.am was a founding shareholder in Beats Electronics, the maker of Beats by Dre headphones. More recently he formed i.am+, a consumer-electronics company that is trying (and struggling so far) to create a hit wearable device.

The Grammy-award winning artist says the company and his charitable foundation want to persuade inner city youth to pursue careers in science and technology, not the NBA and MTV.

"There is no one they can look up to that resembles their lifestyle," will.i.am said at SkyBridge Capital's SALT Conference in Las Vegas earlier this month.

Many kids also still dream of becoming the Black Eyed Peas, he said. But will.i.am has a message to kids: "Our business isn't the business."

Inner city schools are flawed: Will.i.am, whose full name is William James Adams Jr., expressed frustration with the public education system in inner cities. He said it's "butt backwards wrong" that schools focus on physical education and team sports but not enough on science and technology.

"My sister isn't going to be a freaking NBA superstar," will.i.am said.

Before he started the Black Eyed Peas in the 1990s and hit it big in the early 2000s, will.i.am grew up in housing projects in the Boyle Heights neighborhood of East Los Angeles.

"I'm on a mission to change ghettos that resemble the ghetto I was brought up in," he said.

While the 40-year-old entertainer went to school at a charter school in the Palisades, he realizes many inner city kids don't have that opportunity.

"No money is being spent in these inner cities on education. America is in a really funky place if we aren't educating our cities. Inner cities in 20 years could turn into slums," will.i.am said.

Will.i.am is hoping the tech entrepreneurs of tomorrow include more kids who grew up in inner cities like he did. At the SALT Conference in Las Vegas, the entertainer showed off the Puls, his company's latest attempt at a smart band.

While the first version of the wearable device was slammed by the tech world, Gucci recently partnered with will.i.am on a new line of smart bands.

It's not clear if the device will ultimately succeed, but will.i.am is determined to serve as a new kind of role model for inner city kids.

"My mission is to build the Puls alongside the philanthropy to continue to sustain and scale our work and inspire these kids to dream down this STEM street," he said.