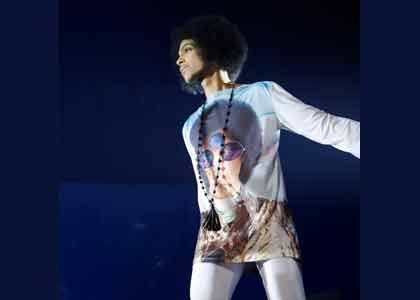 Prince performed at the Royal Farms Arena in Baltimore in the “Rally 4 Peace” concert on Sunday, May 10, 2015. (Courtesy Photo/NPG Records, Ralston Smith)

BALTIMORE — On the evening of Sunday, May 10, 2015, Prince kept his promise to bring people together in Baltimore with his Baltimore Rally4Peace Concert. With the statement “We are your servants Baltimore. We are here for you. We are here for the city,” Prince began a barrage of songs starting with “Let’s Go Crazy.”

I have been to Prince concerts in the past and without question this night was something different. The events that took place in Baltimore recently, must have really touched Prince deeply, because in my opinion, this was his most passionate and heartfelt performance!

Prince even remixed one of his hits to give that Baltimore Club feel. Some of the highlights of the show are when Prince brought Baltimore State’s Attorney Marilyn Mosby and her husband Baltimore City Councilman Nick Mosby on stage; when one of hip-hop’s greatest entertainers Doug E. Fresh hit the stage with Prince; and finally, when Prince let the world know he “got hits” by showing his deejay skills mixing his hit songs together and performing them.

The final few minutes were the best when he jumped on the piano to go through a series of slow jams such as “Do Me Baby,” “Diamonds and Pearls,” and ending with the song “Purple Rain.”

Members of the group Revolution Club (www.revcom.us) stood outside Royal Farms Arena wearing t-shirts with banners and posters to ensure that the real reason for the protests and rallies were not lost in the excitement of the concert.

“People need to keep speaking out. We are not here to stop the concert but we want to make sure that people don’t forget what happened, not only to Freddie Gray but other black and brown people who have been harmed by the police not only in this city but throughout the world,” said Noche Diaz, a spokesperson of the group.