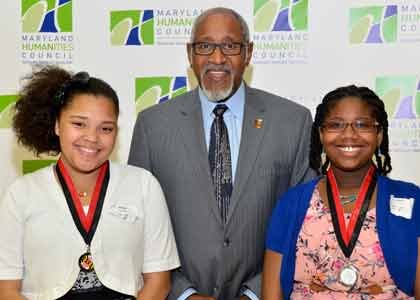 BALTIMORE — More than 600 talented middle and high students, along with their proud parents and teachers, converged on the campus of the University of Maryland, Baltimore County on Saturday, May 2, 2015 to compete in the annual Maryland History Day state contest. Representing 10 counties and Baltimore City, 68 students were selected to advance to the National History Day competition. Additionally, 82 students won special awards at the contest.

A program of the Maryland Humanities Council (MHC) now in its 15th year, the statewide competition involves nearly 23,000 students at the school level, representing 18 counties and Baltimore City. Students research topics that address the National History Day theme and participate in school and county competitions to qualify for the state contest. The 2015 theme is “Leadership and Legacy.”

Students conducted in-depth research over several months, delving into primary and secondary sources and conducting interviews with experts. Topics ranged from national themes such as “Frances Perkins–The Mother of Social Security” and “Woody Guthrie: How His Protest Music Helped Change History,” to local topics such as “Harriet Tubman: Conducting the Fight for Freedom in Maryland” and “The Legacy of the Baltimore Fire–The Mayor’s Leadership 1904.”

Students also addressed issues related to science and technology, such as “Smallpox Eradication: The End of a Disease and the Beginning of a New Era in Public Health,” “Alan Turing: The Things No One Could Imagine,” and “George Eastman: Establishing the Camera as the American Documenter.” Projects that focused on the contributions of women included “Madame C. J. Walker: The First Self-Made Female Millionaire,” “Evita: Opening New Horizons for Women, Workers and Impoverished Argentina,” and “Marie Curie: The Mother of Radioactivity.”

A complete list of advancers, special prizewinners, and teacher awards is available at www.mdhc.org. Maryland History Day is made possible with generous support from the Maryland State Department of Education, the National Endowment for the Humanities, and The Abell Foundation. Columbia Gas of Maryland, Whiting-Turner, and Ziger/Snead Architects sponsored specific award categories.