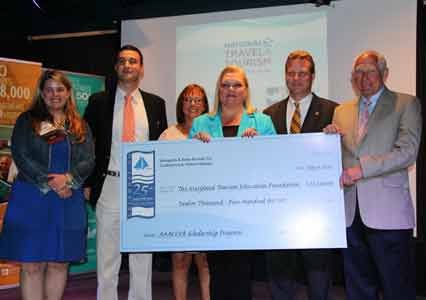 ANNAPOLIS, Md. — On May 6, 2015, Connie Del Signore—president and CEO of the Annapolis & Anne Arundel County Conference and Visitors Bureau (AAACCVB) and Erin McNaboe — AAACCVB board chairman and president of The Rams Head Group, announced the establishment of a scholarship fund that will make it easier for Anne Arundel County residents to pursue tourism careers. Tourism industry leaders and elected officials gathered at Rams Head On Stage in Annapolis, along with members of AAACCVB and partners. AAACCVB presented a $12,500 check to the Maryland Tourism Education Foundation (MTEF), which is a 501(c)3 tax-exempt charitable foundation. MTEF will distribute scholarship application forms through its established network of colleges and universities.

Del Signore and McNaboe challenged event attendees to help match AAACCVB’s donation amount to reach the financial goal of collecting $25,000 in time for AAACCVB’s 25th anniversary celebration on September 17, 2015. In response, Senator John C. Astle presented a check to the Maryland Tourism Education Foundation (MTEF) at the function. The public is currently encouraged to make a scholarship donation.

“The Maryland Tourism Education Foundation is dedicated to building the capabilities of Maryland’s tourism workforce. We do this in part by identifying and assisting promising individuals who will add to the strength and vitality of the industry. Every dollar that comes into our foundation goes toward achieving that goal,” Deb Carter, MTEF’s president said.

As a part of the observance of National Travel and Tourism Week, which championed the power of the travel and tourism industry from May 2-10 this year, “Travel is Jobs” was the selected theme that was highlighted by AAACCVB. Gary Oster, U.S. Travel Association executive vice president said that travel is a 2.1-trillion dollar industry for the direct and indirect spend in the U.S. Oster’s remarks underscored the potential benefits of investing in tourism professionals who may be in need of scholarship money.

“It’s an absolute huge industry. We employ one out of nine Americans. We’re in the top 10 largest employers in every major large city in America in all 50 of the states…so this is a great, great industry,” Oster said. “This is an industry that has seen more rapid growth in the hiring of people than in any other segment within the U.S. economy. In fact, our hiring has gone up 37 percent as an entire industry..”

According to a 2015 Choice Communications Systems study, the tourism industry in Annapolis and Anne Arundel County directly employed 34,737 individuals, which accounts for 17% of private sector jobs and $932.3 million in wages earned in 2014.

“Our industry is a significant player in Anne Arundel County’s economy. We can help keep it that way by providing promising individuals with the help they need to jump-start a career in travel and tourism. Our young people are the future of the hospitality industry, and money spent on helping them realize their dreams will come back to this community and our nation 100 fold,” Del Signore said.

“I am especially excited about this scholarship program because…it is going to give young people an opportunity to be a part of this exciting industry of tourism that we have here in our county,” Schuh said.

Scholarship application and scholarship donation forms are available via http://www.visitannapolis.org/articles/view/Join-the-AAACCVB-Scholarship-Fund-for-Anne-Arundel-County-Residents/342/. The deadline to submit applications for the scholarship is July 31, 2015.