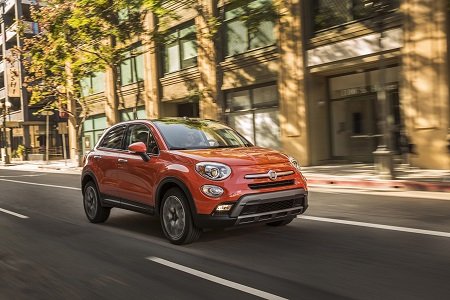 The Fiat 500X expands the brand offerings and gives it a small crossover, which is a growth segment of the market. 9Photo: NNPA)

BEVERLY HILLS, Calif. (NNPA) — It was bigger, taller and barely looked like a Fiat 500 from the side. But from the front it was unmistakably the small Italian import that has had some success during its four years in the U.S. market.

The car had the double headlamps, the trapezoidal nose, signature “whiskers and logo” face and rounded clamshell hood reminiscent of the original Fiat Cinquecento on which it is based. But it was a little different.

The roof was rounded; it had more than five inches of ground clearance, which meant that it was more than an inch higher than a regular Fiat 500. That is because the 500X can be equipped with all-wheel-drive. In effect, it is a small crossover and it went go on sale just before summer began.

At the time of the test drive, fuel efficiency of the 2016 Fiat 500X had not been finalized. But a staffer said that both engines were expected to get more than 30 mpg on the highway.

Inside, the car featured a body colored instrument panel and a circular instrument cluster display. It was a really clean look with the UConnect information screen featured prominently and the climate controls beneath.

Our Fiat 500X test car was really spacious. There was only two of us but the car looked like it could carry four adults comfortably. Although most of the roads in Southern California are in very good shape, the test car rode smoothly, quietly and the electric power steering responded to driver input well.

We found ourselves on the Santa Monica Freeway a couple of times and the car never seemed swallowed by the traffic. We had a front-wheel drive version of the 500X with the 2.4-liter, four-cylinder engine. It had enough oomph to hold its own on the area’s notoriously swift freeway as well as the surface streets.

About that only gripe we had was at times our test car’s nine-speed transmission didn’t know what gear to choose and was a little jerky about the selection. However, we were driving pre-production cars and we’re pretty confident gear mapping has been finalized and it is smooth.

In a phrase, the Fiat 500X expands the brand offerings and gives it a small crossover, which is a growth segment of the market. Of course, Fiat expects younger buyers but this car is about psychographics more than demographics.

We had a 500X Lounge. It had 18-inch wheels, a dual pane sunroof, a premium audio system, lane departure warning and forward collision warning. It was $31,100 including the freight charge. That was the other thing about the 2016 Fiat 500X. Yes, it is a small crossover but it had some big car stuff.

It could be outfitted with an eight-way power driver’s seat, there were three versions of UConnect, it has Bluetooth, a navigation system, voice controls, three drive modes, blind spot monitoring, keyless start and stop, heated front seats, a heated steering wheel and a backup camera. Each trim line had from four to six options.