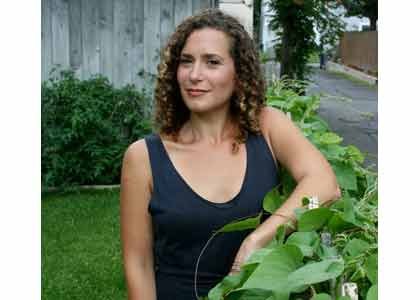 Lizzie Skurnick is returning to Baltimore on Wednesday, May 27, 2015 where she will appear at the Ivy Bookshop located at 6080 Falls Road for a 7 p.m. book signing and discussion. (Courtesy Photo)

When the celebrity gossip website TMZ attempts to figure out whether someone has had plastic surgery, they pose the question to readers whether a star’s good looks are a result of good genes or good doctors. TMZ probably should defer to Lizzie Skurnick, who has mastered the English language so much that she has created her own verbiage— well, sort of.

“Skinjecture is the word I created to try and figure out whether someone’s had plastic surgery,” said Skurnick, a former Baltimore resident and columnist for Jezebel.com’s “Fine Lines.”

Skurnick, a comedian, writer, publisher and author of 10 teen books in the “Sweet Valley High, Love Stories and Alias” series, has released a new book titled, “That Should Be a Word: A Language Lover’s Guide to Choregasms, Povertunity, Brattling, and 250 Other Much-Needed Terms for the Modern World.”

The book is based on her popular New York Times column of the same name.

“When I started the column, I didn’t realize that I could do so many words and do them so easily,” Skurnick said. Everybody thinks of a word or two, but I realized that my brain was sort of making me think of inside jokes.”

For instance, Skurnick came up with “Bitemize,” a combination of bite and itemize meaning someone who’s eating small bits of food while obsessively counting calories.

Then, there are “Gafftermath,” which is the fallout from a scandal; “Sipster,” an individual who expresses coolness through drinks; “Brattle,” which is to talk too much about your children and then there’s another one of Skurnick’s newest words that many can relate to, “Fidgital,” the excessive checking of a device such as a cell phone.

“I love analogies and I love making stuff up,” she said. “I have always made up words. And I have also always made up analogies. And I think all of that came together, the punning, the rhyming, and the mania.”

Skurnick, who graduated from Johns Hopkins University Writing Seminars with a master’s degree, currently writes the blog, “Old Hag,” a Forbes Best of the Web honoree.

She has her own book imprint, Lizzie Skurnick Books, and she also serves on the board of the National Book Critics Circle.

Skurnick’s poetry has appeared in various publications and outlets including the New York Times magazine.

“I noticed it [the ability to come up with odd words] when I was younger and my old English teacher would say, ‘I love finding Lizzie’s hidden words,’” Skurnick said.

Finding the words now are easy, but deciphering can be a challenge.

However Skurnick, a lexicographer, humorist and a keen social observer— as noted on the book’s cover— makes it quite simple. She says the hundreds of words found in the new book simply describe the particularities and peculiarities of life in the 21st century.

Skurnick says she is looking forward to returning to Baltimore on Wednesday, May 27, 2015 where she will appear at the Ivy Bookshop located at 6080 Falls Road for a 7 p.m. book signing and discussion.

She said her appearance will be a “little of a love song to the city.”

“The time in Baltimore was very mportant to me and it’s where I lived growing up as a writer,” Skurnick said. “I wouldn’t be the writer I am without Baltimore. This city is where I found myself as a writer.”

For more information about Skurnick and her scheduled visit to the Ivy Book Shop, visit: www.lizzieskurnick.com and www.theivybookshop.com.