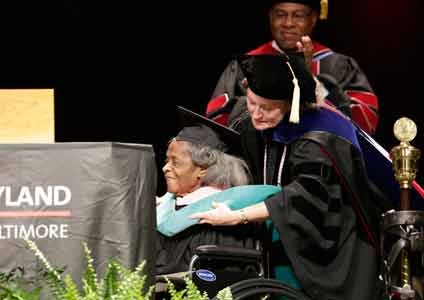 BALTIMORE — Though small in stature and soft in voice, there is little doubt that Esther McCready proved to be a giant in the fight for civil rights.

On Friday, May 15, 2015, the 84-year-old pioneer’s life came full circle as she received a Doctor of Public Service honorary degree from the University of Maryland Baltimore (UMB)— the same institution that in 1949 denied her entry to the School of Nursing because she was black. 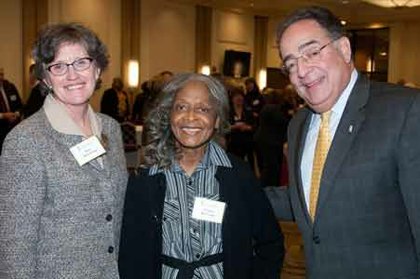 To celebrate the 125th anniversary of University of Maryland School of Nursing, Esther McCready was honored as one of the School of Nursing’s 25 inaugural Visionary Pioneers at a gala at the Baltimore Marriott Waterfront Hotel on April 18, 2015. The Visionary Pioneer Award is given to alumni who have made a significant impact on—and contribution to— the field of nursing based on leadership, innovation or entrepreneurship. (Left to right) UMSON Dean Jane M. Kirschling, PhD, RN, FAAN; Esther McCready, MM, BM, DIN; and University of Maryland, Baltimore President Jay A. Perman, MD.

“There is a famous piece by African-American writer Langston Hughes that asks the question of what happens to a dream deferred,” said Dr. Jane Kirschling, the dean of the University of Maryland’s School of Nursing.

“To Esther McCready, the answer is that it isn’t [deferred]. She applied to the school in hopes of earning her diploma in nursing and her application was denied,” Kirschling said before introducing McCready to a large gathering at the school’s commencement. “Never one to back down from a challenge, she agreed to let the NAACP argue her case in the Maryland courts.”

Two years later her attorney, Thurgood Marshall, was successful in the fight to get her enrolled as the first African American student admitted to the University of Maryland’s School of Nursing.

Wheelchair bound, McCready took the stage to thunderous applause. Not well enough to address the crowd, McCready’s smile suggested that she was ever grateful and proud of the honor bestowed by school officials.

McCready was the first African American student to graduate from the program in 1953.

“As an alumna, nurse, educator and citizen, Esther McCready has come to exemplify the best characteristics of a public servant, for whom commitment and service are inextricably linked. In awarding Esther McCready an honorary doctorate from UMB, the pleasure may be hers, but the honor is surely ours,” Kirschling said.

As noted on the school’s website, Niña-Cecilia Santos, class president of the School of Dentistry, served as student speaker at the graduation ceremony for the roughly 2,000 members of UMB’s Class of 2015, from its schools of dentistry; law; medicine; nursing; pharmacy; social work; and its graduate school.

“Coming to school at the University of Maryland’s founding campus I came to know a new community,” Santos said. “All of us did, arriving at a graduate campus that trains the future leaders of Maryland to do unparalleled research at state-of-the-art facilities.

“We came from all over to learn new ideas, new knowledge and new rules. We rose to the occasion. The crux of this ceremony isn’t to celebrate the acquisition of a piece of paper. It celebrates our transformation. When we put on the uniform of our calling, be it white coats or suits, we take on the identity of our profession and all its responsibilities,”

For Santos and many others, homage to McCready was natural as the civil rights champion helped to open many doors because of her battle against discrimination.

Kirschling says the School of Nursing now has 37 percent minority representation and 53 percent of those are African American. She says students have gained a great deal because of the strength, perseverance and determination of McCready.

“Not only were Esther’s dreams not deferred, but thanks to her courage and bravery, the dreams of so many others did not have to be either,” Kirschling said, before turning to McCready.

“Esther, we honor you as a civil rights icon, a transformational figure in education. You are a treasure.”