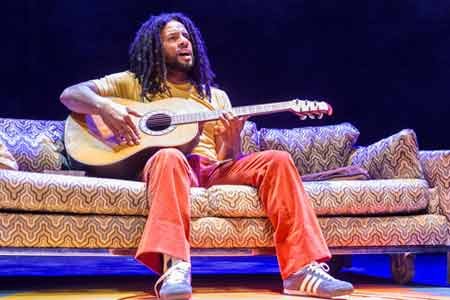 From Center Stage Artistic Director Kwame Kwei-Armah, comes a world premiere musical based on the life and music of Bob Marley. surviving an assassination attempt in 1976, Marley left Jamaica for London, where he spent nearly two years in self-imposed exile. Chronicling the events surrounding this earth-shaking moment, Marley tells the story of a man transformed into one of the 20th century’s most important cultural figures.

Set in the soundscape of an era, this new musical weaves together the life and music of a man who, to heal himself, first healed his homeland.

The play was superb and Center Stage was definitely saving the best for last. There is no way Kwei-Armah could have anticipated the riots of Baltimore were going to happen right before the opening of this well performed musical performance.

Actor Mitchell Brunings embodied Marley and every ounce of emotion that Marley felt the audience felt as well. The music choices really set the tone and the mood that captured what was happening during that time period. As with every great leader Mitchell’s Marley was conflicted, unsure, and trapped. This musical captures all of this and you really get caught up in what Bob Marley was going through. This show has to be and needs to be on Broadway.

Marley will run at Center Stage until June 14, 2015. For more information visit: www.centerstage.org