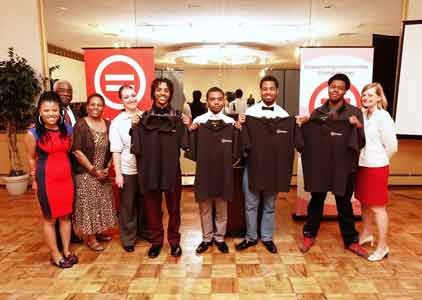 ATLANTA, Ga. — Wesley Read, 18, will graduate from City Neighbors High School later this month. The senior remarked that the Greater Baltimore Urban League’s (GBUL) Saturday Leadership Program provided valuable college exposure. After attending each session for a year, participating in the program helped Read to understand what to expect during his future journey. While Read prepares to officially make his transition from high school to college, he reflected on visits made to numerous area colleges, and the advice that was offered by GBUL’s young professionals who conducted leadership development sessions.

“In a way it has pushed me toward college. I have always wanted to go,” Read said.

When asked what advice he would offer younger students, Read said, “I would tell them that right now it seems like the worst thing in the world is to go to school and to get your education, but in the long run, it’s really going to help you out when you get there.”

J. Howard Henderson, president of GBUL, created the program to bring youth together from across Baltimore City. In addition, Henderson aspired to fill a gap for youth who are not a part of the Talented Tenth, but who have not gone astray either. There is no GPA requirement to participate. Instead, the focus is on determining who would benefit from the program and attend sessions. All programming is conducted on college campuses accessible using the Maryland Transit Administration (MTA) bus line. Doctors, lawyers, IT professionals, managers, principals and a range of professional volunteers facilitate sessions.

“We believe that what can do really, really well is [provide] exposure to college, exposure to a wide variety of development topics through the workshops, exposure to Baltimoreans who have gotten their college degree, and then went on to do great things for their community, and then expose [students] to facilitators who are both college-educated and black,” Estelle Young, director of New Initiatives for GBUL said.

“Personally, I have always wanted to go to college. It’s been something that’s been a goal of mine,” Gary said.

Having an opportunity to visit a variety of colleges allowed him to determine which one may be a good fit.

Young is a full-time volunteer with GBUL, which administers the Saturday Leadership program. Although consistent student attendance can be challenging, investing in developing leadership potential, and promoting career readiness, can contribute to the long-term success of students like Gary and the other high school graduates.

“It’s been very rewarding to me that it is an all-volunteer program and that we’ve been able to mobilize. We have grants of about $20,000 [yearly]. At almost no cost, we’ve been able to provide this really high quality service. ” Young said.

Davayonn Tyler attended the Saturday Leadership Program for two years and only missed one session. He typically took two buses to get to the program arriving at 7:15 a.m. Tyler was accepted to engineering programs at both Morgan State University and Virginia State University. He is still deciding which school to attend, but the bigger point is Tyler has choices about where he will further his education.

Seventeen-year-old Daekwan Jacobs also acknowledges the value of choices and decision-making. He will be the first person in his immediate family to attend college. The graduating Baltimore City College High School student plans to

attend St. Mary's College of Maryland. He is leaning toward studying biochemistry.