Fast food versus the African diet, the bacteria battle waged in your gut

Wheat, yogurt and vegetables could be fertilizers for healthy gut bacteria 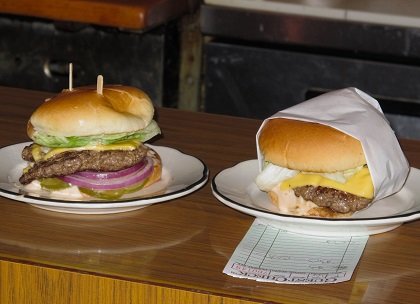 Owner Michael Osborn has owned the Pie 'N Burger for almost 40 years---it's a local landmark in Pasadena, CA offering up the classic old school type burger serving about 250 a day. It hasn't changed that much over the years, but they do offer Turkey burgers and Vegetarian burgers along with the classic cheeseburger----Miguel Rivas says "the secret is the sauce homemade Thousand Island." (Photo: CNN)

Next time you are trying to decide what's for dinner, consider that you are eating for two. You and your gut microbiome.

It is in your best interest to keep this microbiome mass of bacteria happy. Gut microbiomes that contain healthy, inflammation-reducing bacteria could help reduce the risk of a myriad health conditions: cancer, heart disease, infection. Stool transplants from a person with a healthy microbiome have been shown to help cure antibiotic-resistant infections.

"We are getting a pretty good idea of what's good or bad for the gut microbiome," said Dr. Tim Spector, professor of genetic epidemiology at King's College London. How food affects the microbiome is the subject of his new book, "The Diet Myth: The Real Science Behind What We Eat."

The book includes hints about how fast food could wreak havoc on our gut microbiome. As Spector discussed, his 23-year-old son put himself on a strict diet of fast food for 10 days as part of his dissertation project. It stripped his gut microbiome of about a third of its 3,500 bacterial species. Bacteria that have been linked obesity flourished.

Not to mention the toll, he said, the fast food regimen took on the young man's body: "My son was at first excited to get 10 days of fast food, but after day three the novelty had worn off," Spector recalled. Spector is now working on testing the fast food diet in a group of volunteers to see if their microbiomes are similarly affected.

While Spector works to learn more about the connection between fast food and the microbiome, a number of studies are already giving us an idea which foods are good and bad for the gut.

Morgan Spurlock showed us how eating nothing but McDonald's for 30 days wreaked havoc on his body, including his liver, mood and sex drive, in the Oscar-nominated documentary "Super Size Me."

Spector's study is the first one so far to hone in on the microbiome and how it is affected by a fast food regimen. However, several studies have explored the effects of diets high in fat and low in fiber, which are probably similar to the diets of frequent McDonald's goers.

A small 2014 study swapped out the low-fat, high-fiber diet of 20 rural Africans in South Africa for meats and fried foods; on the flip side, researchers switched the high-fat low-fiber diet of 20 African Americans in Pittsburgh for a typical African diet, including cornmeal porridge and root vegetables.

The researchers reported that after only two weeks of diet "Westernization," the microbiomes of Africans were producing about half the levels of a molecule called butyrate, which has been linked to lower inflammation, as before their diet intervention. In contrast, the microbiomes of Americans started churning out about twice as much butyrate after they went on the healthier African diet. The Africans also acquired more bacteroidetes, the same group of obesity-associated bacteria that took over Spector's son's microbiome.