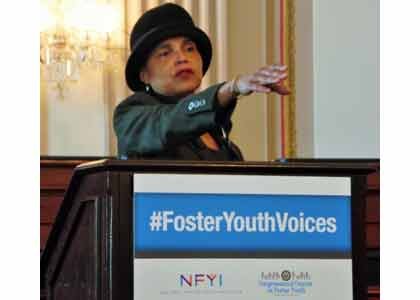 Actress Victoria Rowell delivered an eye-opening keynote speech that stressed the importance of inclusion, advocacy and determination at the 2015 Foster Youth Shadow Experience Luncheon in the Cannon House Office Building on Capitol Hill on Wednesday, May 20, 2015. (Photo: Andrea Blackstone)

WASHINGTON — As a part of the Fourth Annual Congressional Foster Youth Shadow Day, 63 foster youth and foster youth alumni from across the nation convened on Capitol Hill on May 20, 2015, to shadow their Congressional Representatives. In addition to being granted a rare behind the scenes look at the House of Representatives, the youth between the age of 18 and 24 directly shared their personal foster care stories with the policy makers in an effort to improve the foster care system through reform. 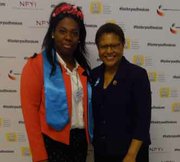 “I officially got into my first foster home when I was 14, and I just aged out in November,” said 21-year-old Mary Josephine Fuwa, a college student and part-time nanny. Fuwa spent time in foster care mostly in Maryland and was also a ward of the state in the District of Columbia.

Over a three-day period, the National Foster Youth Institute, Congressional Caucus on Foster Youth, Foster Club and Casey Family Programs and other advocates worked together to promote awareness that more than 400,000 children live in foster care.

co-chairs and members. The congresswoman co-founded the bipartisan Congressional Caucus on Foster Care in 2011 and is a co-chair along with Tom Marino (R-Pa.), Jim McDermott (D-Wash.), Trent Franks (R- Ariz.), Diane black (R-Tenn.) and Jim Langevin (D-R.I.). They joined 119 co-sponsors in introducing “H. Res. 251” to recognize May as National Foster Care Month.

In a May 5, 2015 press release, Representative Franks said “Last year over 23,000 children aged out of foster care without a permanent family. We must do more.”

“Somebody stood up for you somewhere,” Rowell reminded foster youth, while reflecting on her own foster mothers and mentors who made sacrifices.

The American Ballet Theatre Ballet alumna, member of the Screen Actors Guild, member of the Television Academy and author spent 18 years in foster care. One of six children, all of different paternity, Rowell said that she has been a foster care advocate since 1991.

Rowell stated that the difference between failing and succeeding in her life was hard work and instinct. The actress took time to answer fan mail from incarcerated individuals.

“I knew that could’ve been me in that prison cell, if no one had given me access to be at CBS to work for a soap opera,” the former Young and the Restless star said.

Rowell spoke about studying ballet on a farm in Maine. Her foster mother taught her the art form from reading a book. The advocate revealed her sentiments about being a voice for the underserved. She also remains vocal about increasing diversity in soaps but most importantly, Rowell showed foster youth that they too can be a champion for others and accomplish their dreams.

“I’m not here to talk about the statistics. We know what they are,” Rowell said. “I’m telling you we are special people.”