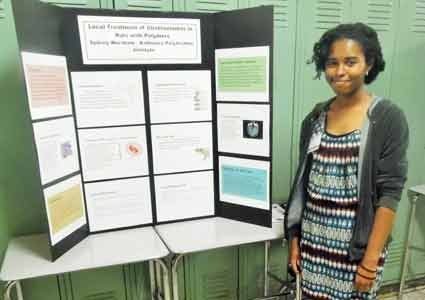 Sydney Worhsam, 16, shows her poster presentation about treating rats that have brain cancer with chemotherapy. She will be working with her mentor, Dr. Betty Tyler. The goal will be to determine if they can improve the efficacy of two medicines and treat brain cancer in humans. (Photo: Andrea Blackstone)

BALTIMORE — Tula Raghavan recommended the use of acriflavine for the treatment of glioblastoma multiforme, which is an aggressive form of brain cancer. The graduating senior from Baltimore Polytechnic Institute (Poly) worked in the Johns Hopkins Hunterian Laboratory, under the mentorship of Henry Brem, M.D., director of Hunterian Neurological Research Laboratory. The treatment for brain cancer that is reportedly showing promising results is currently patent-pending.

The 2015 graduating senior class of Ingenuity at Poly

Raghavan’s research is just one example of the impressive work that was displayed at the 13th Annual Ingenuity Math & Science Symposium at Poly on May 21, 2015. The Ingenuity Project at Poly, which started in 1997, is designed is to prepare the next generation of STEM leaders from Baltimore.

Timothy J. Regan, CEO of Whiting-Turner, a Baltimore-based contracting company, welcomed students, parents, research mentors from various universities and other guests to the symposium. Whiting-Turner led construction projects such as the second span of the Chesapeake Bay Bridge, Harborplace, M&T Bank Stadium, Meyerhoff Symphony Hall and the National Aquarium. Regan’s successful career demonstrates the talent of Poly’s alumni who were once students like Raghavan with innovative ideas. The civil engineer graduated from Poly in 1973.

“When I made the decision to come to Poly, my life changed that day,” Regan said. “Poly and the Ingenuity Project are amazing places and institutions for people to grow.”

Ingenuity Project students who participated in the symposium exhibited the drive to contribute to breakthroughs in fields including medicine, technology and mathematics. At just 16 years old, Sydney Worsham has been exploring whether brain cancer treatment in humans can be improved. This summer, the student will start researching in a lab with her mentor, Dr. Betty Tyler.

“We’re basically treating rats that have brain cancer with chemotherapy. We’ve been working on this maybe a year now. We haven’t actually started researching directly [but I have been doing research] on the Internet and talking with my mentor,” said 10th grader Sidney Worsham. “Originally, I wanted to research dementia, so I started off learning about the brain and its mysteries and things that go wrong, but I ran into cancer. Cancer itself is a whole new mystery, especially when found in the brain.”

Phoebe Sandhaus was the 2015 grand prizewinner in Physical Science during the Baltimore Science Fair.

“Even though she is graduating and going to UMBC next year, she is going to be continue to do work with the planets in the Space Telescope (Science) Institute,” said Lisette S. Morris, executive director, Ingenuity Project.

Morris explained that the Annual Ingenuity Math & Symposium at Poly is intended to honor the work that students are doing in scientific research.

“We have a pathway here at Poly in Ingenuity where students can opt to pursue independent research. They decide on an area of interest as they are going through their high school science classes and math classes. They hone in on a topic and then we have a research coordinator who works with mentors and scientists in laboratories all across Baltimore, but many at Hopkins and the Hopkins medical institutes,” Morris said. “He matches them up with mentors that he has been working with now for many years who really understand what it means to take students into their labs, and give them meaningful experiences, so our students spend about 15 months working in a laboratory. During their junior year, they go off-site to those laboratories many days during the week.”

The Ingenuity Research Curriculum is a three-year program that spans from sophomore to senior high school years.

“The goal is that they are really starting to learn what is happening in that lab and starting to create their own project to contribute to the research of that laboratory. Much of their work is some aspect of original thinking around scientific research. That’s the goal of what we’re trying to do with all of them,” Morris said.

“Solving this has definitely given me a good understanding of math, and maybe some of the problems that I might face in more advanced courses,” said Mahmoud, who plans to study Physics at UMBC.

Aladejebi will study Mechanical Engineering at Bucknell University. He described his experience as a good introduction to the way of thinking that he expects to use in college coursework.