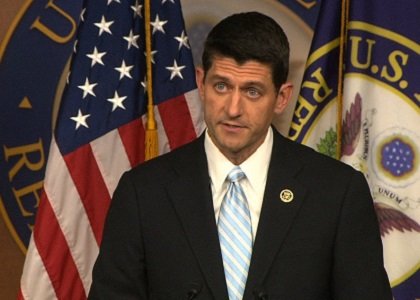 Rep. Paul Ryan told House Republicans he is "willing to serve" as speaker and will make a decision within the week. (Photo: CNN)

WASHINGTON (CNN) — House Speaker Paul Ryan pushed back Sunday against calls to expand paid family leave despite his own desire for a work-family balance in his new job.

"I don't think that sticking up for being a person with balance in your life, for wanting to spend your weekends in your home with your family ... I don't think that means signing up for some new unfunded mandate," Ryan told CNN's Dana Bash on "State of the Union."

Ryan faced criticism from the left after he said he would not give up time with his children to become speaker. Some liberals even called his remarks hypocritical, citing his vote in 2009 against a proposal that would have given federal workers four weeks of paid parental leave.

"I cannot and will not give up my family time," Ryan said earlier this month as a condition of his candidacy for House speaker.

"Women in particular heard you talking like this and said, 'Wow he gets it, maybe he can do something about it,'" Bash said.

But Ryan explained that this personal view does not correlate with his public policy opinion.

Ryan instead referred to a bill, the "Working Families Flexibility Act," that was proposed by fellow Republican Rep. Martha Roby as an alternative. It would give private sector employees the option of using their earned overtime toward paid time off at the sacrifice of time-and-a-half overtime pay. Ryan co-sponsored the bill.

"I think we've had some pretty good legislation on flex time," Ryan said. "And that's a bill that I think is a great idea."