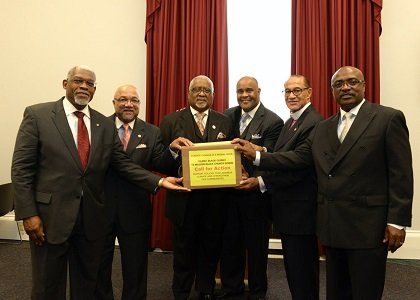 The leaders said they are making the effort to push forward the bill, which has a goal to reduce carbon dioxide emissions by 32 percent by 2030.

Bishop George Battle, senior bishop of A.M.E. Zion Church; the Rev. Samuel C. Tolbert, Jr., president of the National Baptist Convention of America, and the Rev. Timothy Tee Boddie, general secretary to the Progressive National Baptist Convention of America, were among the 10,000 who presented their signatures to members of the Congressional Black Caucus.

” As faith and community leaders, their commitment to protecting and preserving our fragile planet is greatly needed as we work to address climate change,” Lee said in a statement.

Lee said the president’s plan and other environmental action must have a positive effect on disadvantaged communities.

“This is truly an issue about justice – environmental justice, economic justice and racial justice. The negative effects of pollution and climate change have disproportionately affected communities of color,” she said.

“As we work to reverse climate change, we must all raise our voices together and ensure that the economic opportunities created by the green economy are open to all.”

According to caucus members, almost 40 percent of the six million Americans living close to coal-fired power plants are people of color, and they are disproportionately African-American. Pollutants released from those plants have led to high rates of asthma and respiratory issues within nearby communities.

According to the president and his supporters, his plan would decrease premature deaths from emissions by nearly 90 percent and asthma attacks in children by 90,000 by 2030.

The Rev. Jesse Bottoms, vice president of the National Baptist Convention, echoed concerns about the impact of pollutants on African Americans.

“Environmental concerns are not abstractions for African Americans,” Bottoms said. “They are real, and they affect us in very real ways, particularly our children and seniors.”

According to the White House, the number of Americans with asthma has more than doubled over the last 30 years, and severe droughts, wildfires and the rising sea level are affecting communities nationwide.

Of the 15 warmest years recorded, 14 of them have occurred since 2000, with the warmest year being 2014. Children and the elderly, the sick and the poor are most at risk from effects of climate change.

Bishop Carrol Baltimore of the Global United Fellowship said, “No one should have to live in dirty air that makes them sick, but it’s especially unfair that our least fortunate and most vulnerable communities—our children and those living in poverty and with lower incomes—have to suffer even more than the rest.”