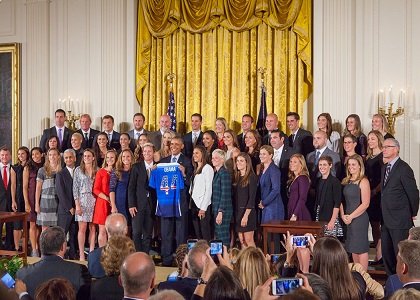 President Obama welcomed the United States Women’s National Soccer Team to the White House to honor the team and their victory in the 2015 FIFA Women’s World Cup. The team presented Obama with a jersey with the number 44 on it. The FIFA trophy sits on a table next to the podium. “These champions deserve all the attention they’ve been receiving,” Obama said. (Photo: Cheriss May/HUNS)

It may or may not have been the most delicate of phrasing, but President Obama made it clear what he thought was the message sent by the U.S. Women’s National Soccer Team in its World Cup victory.

“This team taught all of America’s children that ‘playing like a girl’ means you’re a badass,” Obama said of the women during a special White House presentation to honor the team.

The team beat Japan in the Women’s World Cup final in July to claim its third title since 1991 and second since 1999. The president used his 11-minute speech to drive home the importance of women’s equality both on and off the field.

“These champions deserve all the attention that they’ve been getting,” he said. “After 16 long years, too many heartbreaks, they flew north to put America back on top of the soccer world. And they did it in style.”

Obama kept his remarks jovial and lighthearted, congratulating bi-racial forward Sydney Leroux on her recent marriage and taking note of her dog’s 10,000 Twitter followers, “which makes me thankful that Bo and Sunny don’t have their own accounts, because I don’t need them trolling me from my own house,” he said.

He also mentioned that Megan Rapinoe’s face was the inspiration behind the design of a California farmer’s corn maze.

The president concluded his remarks with a reminder that the team stands for challenging outdated stereotypes and being the best.

“Playing like a girl means being the best,” he said. “It means drawing the largest TV audience for a soccer match, men or women’s, in American history. It means wearing our nation’s crest on your jersey, taking yourself and your country to the top of the world.

Abby Wambach, a forward for the team, echoed Obama’s remarks.

“This isn’t just about soccer,” Wambach said. “This is about women and equal opportunity across the board. I think that’s what we’re here for and that’s what we represent.

In May, team launched #SheBelieves campaign, an effort to inspire young girls and young women to achieve their dreams and avoid common sexist stereotypes associated with their gender. Obama praised the team for launching this campaign.