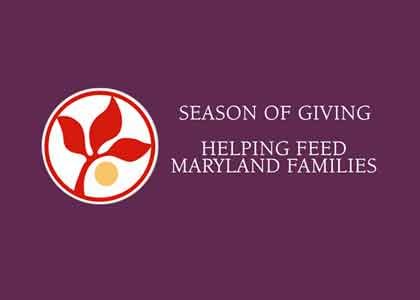 BALTIMORE — The Baltimore Ravens collected food from fans who attended the game against the San Diego Chargers at M&T Bank Stadium on Sunday, November 1, 2015, in a joint project with the Maryland Food Bank in the fight against hunger in Maryland.

Volunteers were positioned at every gate into the stadium to gather both monetary and non-perishable food donations. This year, the goal is to collect 20,000 pounds of food in celebration of the Ravens 20th season and 20 years of supporting the Maryland Food Bank.

The event was announced last week by Ravens defensive tackle Brandon Williams, who shared that being able to help with the food drive holds a special place in his heart.

“It’s near and dear to me because I know how it feels to be that kid in high school who comes home after a long day at school or practice and opens the fridge and there’s nothing. So, either I’d have to go to a friend’s house, or some days just kind of make something up myself and just try to work with what I’ve got,” Williams said. “It’s definitely near and dear to my heart, so I encourage everyone to get out there and definitely give back because there are people who have something and don’t think they have anything, but there’s also people who are worse off than you.”

Williams encouraged fans to bring whatever they could.

According to Williams, the Ravens players are holding a contest to see who can help out the most.

“We’re also doing our part here, doing an in-home [challenge],” Williams said. “I guess you could say a little duel, a little match— to see who can bring in the most money or bring in the most canned food, just to help the process along and help the cause.”

To no one’s surprise, Williams expects to win the contest. He says he will win because he has his heart in it and knows the feeling. For that reason, he’ll be going to Giant food markets to get canned food and other items. The mammoth sized defensive tackle is really excited about the project and says he’ll be bringing items in “by the trash bag.”

Fans can make donations on the Ravens donation page: “YouGiveGoods.com.” Giant Foods will be collecting items at 50 of their stores in the Baltimore area. The collection effort will run through November 16, 2015. An efficient way to donate is to purchase pre-packaged boxes that contain what the Maryland Food Bank has identified as the most-needed food items. These boxes only cost $10 at Giant Food.

There is a push to promote the drive on social media. The hashtag #FeedTheFlock is the best way to share the word on Twitter. The hashtag should be used when making donations because it gives fans a chance to win prizes, including an opportunity to tour the Ravens Under Armour Performance Center in Owings Mills.