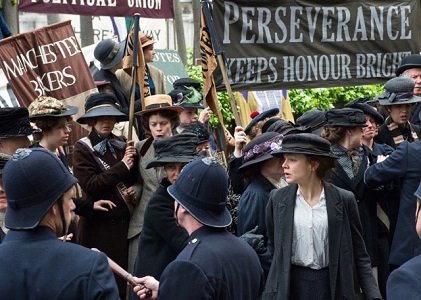 (NNPA) — In the U.S., we revere Susan B. Anthony’s groundbreaking efforts for leading the fight for a woman’s right to vote in the late 1800s. In England, Emmeline Pankhurst, a feminist who used demonstrations, civil disobedience and violence to property for publicity and agitation, spearheaded their cause.

The director (Sara Gavron) and screenwriter (Abi Morgan, The Iron Lady) of Suffragette have chosen to tell the story of England’s movement through the eyes of a fictional working class character. This device gives them the freedom to create an intimate, personal story within the context of a large social phenomenon, and this choice makes their film fascinating and emotionally compelling. It also gives the film a nagging flaw.

In 1912 Edwardian London, following five decades of peaceful voting rights protests, the suffrage movement has lost momentum. The Suffragettes take to throwing bricks through shop windows to spark interests in their cause and interrupt business as usual. One day, Maud Watts (Carey Mulligan, Shame), a worker in a huge laundry, is on the streets caught in the middle of a suffrage protest. She notices that a fellow worker, Violet Miller (Anne-Marie Duff, Nowhere Boy), is part of the melee.

Maud has worked in the laundry since she was a girl. Her husband Sonny (Ben Wishaw, The Danish Girl) works there too, and they live within walking distance with their young son George. Violet talks Maud into attending a meeting of the Women’s Social and Political Union, founded by Emmeline Pankhurst (Meryl Streep), a legend in their feminist community who is on the run from the police.

Years of verbal abuse from a brutish and lecherous boss (Geoff Bell) and working conditions that endanger the health of workers make Maud curious then fascinated by the social progressiveness of the movement. She is further intrigued by WSPU members like the intellectual pharmacist Edith Ellyn (Helena Bonham Carter, Oscar nom The King’s Speech) and the wealthy Alice Haughton (Romola Garai). Fascination turns into participation and acts of violence against property. The group’s conduct is scorned by the local police and politicians. They conspire with an Inspector Arthur Steed (Brendan Gleeson, Edge of Tomorrow), who puts the women under surveillance. Maud risks, jail, beatings and the loss of her family.