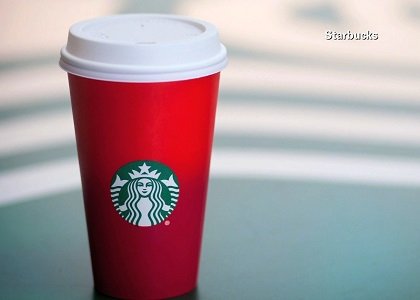 This year's holiday season red cups at Starbucks have stirred up critics who accuse the company of waging a war on Christmas. (Photo courtesy/Starbucks)

NEW YORK (CNNMoney) — This year's holiday season red cups at Starbucks have stirred up critics who accuse the company of waging a war on Christmas.

Starbucks said it removed "symbols of the season" used in the past, which have included reindeer and ornaments, in favor of a simple, two-toned red cup.

When the cups rolled out in late October, Starbucks vice president Jeffrey Fields said the company "wanted to usher in the holidays with a purity of design that welcomes all of our stories."

He posted a video to Facebook on November 5 that went viral. Feuerstein criticizes Starbucks for removing "Christmas from their cups because they hate Jesus."

Feuerstein encouraged customers to say "Merry Christmas" instead of their names in order to "trick" baristas into writing the phrase on the cup. He said to use "#MerryChristmasStarbucks" to post photos online.

In an email with CNNMoney on Sunday, Feuerstein noted that his video has had more than 10 million views.

"I think Starbucks has gotten the message that the Christian majority in this country has awakened and are demanding that our voice be heard," he wrote.

In response to Feuerstein's video, Starbucks said in a statement Sunday that it tries "to create a culture of belonging, inclusion and diversity."

The cup is meant to be a "blank canvas" that encourages "customers to tell their Christmas stories in their own way," Starbucks said.

Some of the video's most-popular comments point out that the company sells gift cards with "Merry Christmas" written on them and sells a "Christmas Blend" coffee.