Braxton was initially thought to have pneumonia 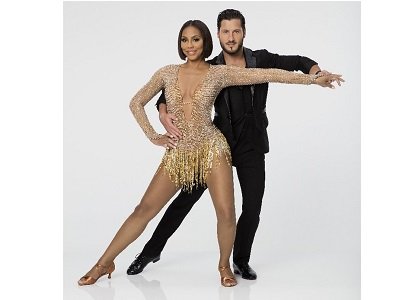 Reality and producer Tamar Braxton doesn't always like to follow directions from pro partner and season 20 champ Valentin Chmerkovskiy. Still, their chemistry and moves are putting them in contention. (Photo courtesy/ABC)

(CNN) — Despite fighting through illness to perform on "Dancing With the Stars" on Monday night, Tamar Braxton has had to pull out of the competition.

The singer had been hospitalized during rehearsals, purportedly for pneumonia, but returned to avoid being disqualified for not performing. Early Wednesday, she posted a picture of herself in a hospital bed with partner Val Chmerkovskiy sitting beside her.

"After yesterday's final #dwts performance I went back to the hospital (after the doctors didn't want me to leave in the first place) only to find out that I don't have pneumonia but something way more serious and that is having several P.E.'s (blood clots in both sides of my lungs)," a portion of the caption read. "As you all know I will be the first to always encourage anyone to push through any obstacle that comes along one's way. But in this case, my health is my current obstacle."

She is the second star to withdraw from the competition because of illness this season.

In September, reality star Kim Zolciak-Biermann was disqualified after she was unable to perform due to a mini-stroke caused by a blood clot.

Fans will have to wait until next week to see how the show deals with Braxton's departure.

Chmerkovskiy had kind words for her after the show Monday, in which the pair was critiqued on their dress rehearsal performance.

"I don't really care about things that aren't important at the moment, and at the moment for me, the priority was Tamar's health and the situation," he told E! News. "I'm not trying to hear critique on a dance that was done with her half-conscious and caused her to be in the emergency room at the moment. For me, that's not what is important. I'm just happy that she was all right and she was able to come back and finish out the show. She's a trouper."