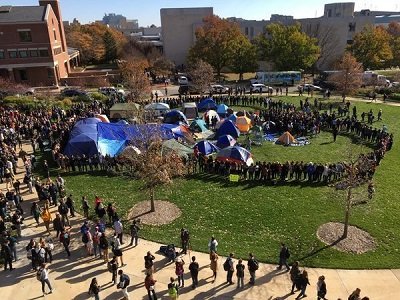 Students and faculty members form a circle around a campsite occupied by protesters at the University of Missouri. (Photo: Lindsay Gloor/Twitter)

(CNN) — The recent resignation of University of Missouri System President Tim Wolfe is not about one incident of a student being threatened with the use of the "N-word," but a part of a long history of intolerance that has only been intensified by the emergence of the #Ferguson and #BlackLivesMatter movements.

As a proud alum of Mizzou's School of Journalism, I am disheartened when students tell me that they are facing the same issues familiar from my days on campus and from decades past. Because of the power of social media, we all had a firsthand look from "ground zero" in Columbia.

Although much of the racial tension that people experience in Columbia today existed when I attended the university between 1999 and 2003, this moment feels like a new day.

Two weeks ago I had the opportunity to visit the campus, and could immediately feel a heightened sense of anxiety in the students as well as faculty and staff. I could see the uneasiness in their eyes. The students are hurt, scared, angry and fearful. Thankfully, despite the emotional and spiritual trauma they have experienced they are incredibly optimistic, resilient, decisive and clear about one thing: The University of Missouri System must commit to every possible avenue to make the campus safe and inclusive for every student, staff and faculty member.

I was recently asked by a colleague what started all of this, and with a quick scan of the recent news stories, both national and local to Columbia, Missouri, there has not been an exhaustive look into how we got here.

It would be shortsighted not to start with Gaines vs. Canada, one of the most important civil rights cases in the 1930s. Cy Woodson Canada, the Registrar at the University of Missouri's Law School, refused admission to Lloyd Gaines because he was black.

I could also point to the fact that 1950 was the first year when black students, nine in total, were admitted to the University. Or the fact that the first black student organization, my fraternity, Kappa Alpha Psi, was founded in 1960, and could reflect upon the experiences that we have heard through oral tradition of the tension between the early members of the chapter on campus and predominantly white fraternities.

We could also talk about the more recent examples, such as the 2010 incident of students placing cotton balls over the lawn of the Gaines-Oldham Black Culture Center, which was named after Mr. Lloyd Gaines. We could tell stories from each decade, but there's no need. It's clear that racial intolerance has a deep, dark history at my alma mater.

The student activist group Concerned Student 1950 has been able to do what no other groups have been able to accomplish on campus -- galvanize the required awareness that our alumni, administration and faculty need to elevate these Iong-standing issues to a higher priority level than ever before. I supported their efforts to make sweeping changes to the university, along with the list of demands that were submitted to and essentially ignored by former President Wolfe.